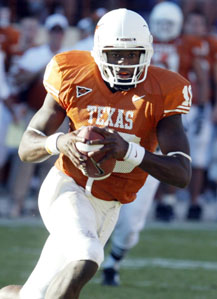 Untitled Document Vince Young returned to the scene of ... well, everything in his life before becoming Texas’ extraordinary quarterback.

Good and bad. Promising and potentially tragic. Young lived a lifetime of experiences in his hometown before guiding the Longhorns to one of their greatest seasons.

The Big 12 championship game between Young’s Texas Longhorns and Colorado was played at Reliant Stadium, not far from where Young grew up in the Hiram Clarke neighborhood. Young returned to Houston to lead Texas to a 70-3 shellacking over Colorado.

"Ever since the season started, when we knew this game was going to be in Houston, I was excited about it," said Young, who played only about 2 quarters against Colorado. "One of the best things the Big 12 ever did, moving the game out of Kansas City to my hometown."

Young’s right from a timing standpoint. The Big 12 title game will have been at Arrowhead Stadium three times in a four-year stretch, with next season’s game ending the run.

This is the first time a team other than Oklahoma has won the South division since 2001. Young could be in Kansas City next year if he follows up on his word to return for his senior season – and Texas wins another division title.

But given what has unfolded this year – with Young having a season worthy of Heisman Trophy consideration – it’s hard to believe Young, a 6-foot-5, 233-pound combination of power and grace, won’t give the NFL draft serious consideration.

"And just a little over a year ago people were wondering whether or not Vince would even be a college quarterback," Texas coach Mack Brown said. "Now, we’re talking about him and the Heisman Trophy and whether he should come back for his senior year."

This season has been that special.

Young is that special.

He has rushed for 986 yards and nine touchdowns. He’s completed 63.9 percent of his passes for 2,769 yards and 26 touchdowns with 10 interceptions, and throwing is supposed to be his weakness. Something about an unorthodox arm motion.

"I don’t see anything wrong with it," Young said. "A lot of quarterbacks throw all kinds of ways. I don’t see where I have to change my style."

Neither did Texas, so the Longhorns tweaked their offense. The loss of top rusher Cedric Benson, plus a dedication from Young to become a better passer, had Texas throwing more often. And they did it more effectively.

"I’d like to know where he keeps his cape at night," Colorado coach Gary Barnett said.

What Barnett sees, besides the nation’s top rushing/passing combination quarterback, is a player whose leadership skills have developed immeasurably.

Consider Young’s impact on a few of the stops along Texas’ 18-game winning streak.

He personally guided comeback victories against Oklahoma State and Kansas last season, leading the Longhorns back from a 28-point deficit against the Cowboys and converting a fourth-and-18 play late to keep alive the game-winning score against the Jayhawks.

He rushed for four touchdowns and passed for another in Texas’ one-point victory over Michigan in the Rose Bowl.

"When I saw him take over that game, I knew he could perform at the highest level," Barnett said.

Young accounted for 346 yards in the Longhorns’ signature victory this season at Ohio State. Texas trailed by six with 6 minutes remaining and needed 67 yards to score. The Buckeyes had taken away Young’s running game, so he passed his way downfield for the winning score.

"You hear about his talent, and he’s wonderfully talented," Texas offensive coordinator Greg Davis said. "But he is as competitive a player as I’ve been around."

Young passed for 241 yards as the Longhorns toyed with Oklahoma, ending a five-game losing streak against the Sooners with a 45-12 thrashing.

For a while Young drove the Heisman bus. But after his most uneven performance of the year – against Texas A&M on Thanksgiving weekend – he’s trailed behind Southern California’s Reggie Bush.

"He’s right there," Brown said of Young. "He’s been one of the top players in the country week after week."

In the spring, Young told a group of reporters in town for a basketball tournament that his mornings begin the same way. He flips open his cell phone and gets a message from his mother, Felicia. It’s a daily Bible Scripture.

And off Vince goes, to class, to practice, to an elementary school to read to kids, to places he could never have imagined going when he was growing up.

Not that he wasn’t athletically gifted. He was, always taller and stronger than kids in his own grade.

But problems seemed to find Young. At 7, while riding his bike, he collided head-on with a car with and needed surgery to repair internal injuries. It was featured on the local news.

At 12, he was handcuffed by police for his role in a brawl at school. Mom was battling a drug problem, and Dad was in jail. Gangs were prevalent.

"When I was in middle school, it was nothing but gangs," Young said. "It was safer for you to be in one than not be in one."

But it was even better if your support group grew stronger, which happened by the time Young got to Madison High.

His grandmother, Bonnie King, and older sisters Lakesha and Vinstria watched over Vince. By now, Felicia had stopped partying. An uncle, Keith Young, had been a small-college quarterback. Cousin Ivory Young played basketball at Alcorn State. They formed a protective wall around Young.

Ivory Young enlisted an old college friend of his, Tennessee Titans quarterback Steve McNair, to become a mentor to Vince. They’ve been friends since.

"He was talented but it wasn’t harnessed," Seals said. "That’s what we had to do."

Young got better every year and developed into one of the nation’s top prospects. In his final high school game, he accounted for 321 yards in a playoff loss that attracted 45,000 fans to the Astrodome.

Reliant Stadium is next to the Astrodome, and even more fans were on hand at the big game. There were as many as 60,000 Texas supporters to witness what turned out to be the program’s first league championship since the Longhorns won the first one in 1996.

The immediate future for Young includes heading to Pasadena, where he and Texas can smell the Roses.

Distributed by Knight Ridder/Tribune Information Services.
Article posted on 12/19/2005
This article has been viewed 3291 times.