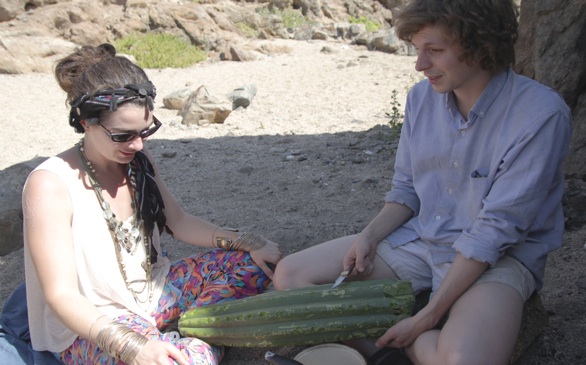 Taking drugs with Michael Cera would be weird. I mean he's kind of a weird guy, isn't he? Super nice and gentle but just a little bit awkward. At least, this is the way he has been type casted in most of his prominent roles—Superbad, Juno and "Arrested Development."  He just seems like he would induce a bad trip or something. But things are starting to change.

2013 has revealed Cera's versatility as an actor. Surprisingly, Cera is no longer a sensitive Sally with his new mold-breaking role in Crystal Fairy.

Crystal Fairy is one of two films by Chilean director Sebastián Silva that have appeared in the Sundance film festival this year. It was also featured in the Los Angeles Film Festival. At Sundance, the film won Silva the Best Director in World Cinema award. This is a feat in its own for the young director, artist and musician. However, it is even more astonishing considering the film was shot over a two-week period in the Chilean desert and was almost entirely improvised.

When Silva ran into funding trouble for Magic Magic—a film in which he cast another uncannily raucous role for the typically tame Cera—he moved onto Plan B. Cera recalled a conversation with Silva about Crystal Fairy, “‘Yeah, we'll do this movie with no crew, no script. We'll just make a movie together.' He told me the whole story, and it just sounded like a great adventure - which it was."

In Crystal Fairy, Cera plays Jamie, an irritatingly persistent American in Chile. Jamie is hell bent on ingesting a dose of the San Pedro cactus, or mescaline. His road to hallucination takes a strange turn when, in a drunken haze, he invites a free spirit named Crystal Fairy to join him. When Crystal Fairy runs into trouble with a pack of gypsies, Jamie and his Chilean buddies (who happen to be played by Silva's three brothers) end up having to develop compassion and as Silva put it, "adopt a fairy."

The film was actually adapted from a real experience in Silva's life.

"Twelve years ago, my best friend and I were planning on going to the desert to take mescaline," said Silva. At a Wailers concert in Chile, Silva met the real Crystal Fairy—a mythical hippie from San Francisco complete with hairy armpits and carefree openness. "We became instant friends--we were really high. I invited her to join us on this trip to the desert, but then I regretted inviting her so we left without her. She waited for us in that square, and she got robbed by a gypsy."

Just like Cera's close-minded role in the movie, Silva eventually rescued Crystal Fairy from the gypsies and brought her on the hallucinogenic journey.

Gaby Hoffmann convincingly plays the role of Crystal Fairy. Having grown up in the iconic Chelsea Hotel in New York, Hoffmann is mostly known for her roles as a child star. She starred alongside big names in films such as Uncle Buck and Volcano. After a 10-year hiatus, Hoffmann returned to acting after being inspired by Silva's award-winning Sundance film, The Maid.

"I had seen The Maid at Sundance a few years ago and it was a really important moment for me because I was very ambivalent about wanting to work for many years," said Hoffmann. "I was at a very low point. Six months ago, I couldn't pay my rent. I was literally about to become a bartender." After working with Silva on a HBO series, “The Boring Life of Jacqueline,” Hoffmann was invigorated.

"Having worked with Sebastian twice now, I have blind faith and will do anything he asks me to," she said. And as the role of Crystal Fairy, it appears that Hoffmann did embrace whatever Silva wanted, including gratuitous nude scenes.

"Being naked for me is not a big deal," said Hoffmann, who authentically portrayed the hippie nature of Crystal Fairy, clothed and naked. After walking into a room stark naked, Crystal Fairy is cruelly yet accurately dubbed Crystal “Hairy” by Cera's character.

"Developing a character through improvisation, that was the hard part," said Hoffmann. Silva brought the characters into the film with a loose outline of what he wanted to transpire, but he wanted the dialogue to be real. And it is. The characters come across with such familiarity that by the end, the audience might think they are real-life acquaintances. They were actually camping out, humbly eating and really living the work. "It was totally immersive," recalled Cera. In fact, Hoffmann didn't just bare it all for a real portrayal of Crystal Fairy; she also actually took mescaline while filming.

In the end, after an eye-opening experience with the magical cactus, Crystal Fairy and Jamie help each other realize that hiding from their true identities is wrong. The entire time, they had erected facades about themselves and dodged reality. It was only until the hallucinogens in the cactus opened their minds to this false reality, that they were able to become aware of their unnecessary hiding.

Crystal Fairy & the Magical Cactus and 2012 (the film's official title) is an achievement for everyone involved. Silva has once again reminded the industry about his powerful storytelling prowess, Hoffmann has regained faith in an industry that once bewildered her, and Cera has evolved his acting repertoire.