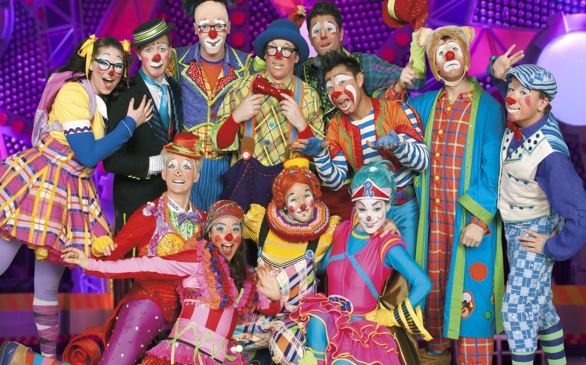 These clowns will have the audience rolling in laughter.
(Credit: Courtesy of Ringling Bros.)

Round up your friends and family, and get ready: The circus is coming to town!

Last year, Ringling Bros. and Barnum & Baily announced their 90-city North American tour called “Built to Amaze!” The tour is finally making its way to Staples Center from July 10-16, as well as Citizens Business Bank Arena from July 19-23 and the Honda Center from July 26-Aug. 4.

This spectacle promises to take “a child’s curiosity of how things all around us work by showcasing the very best performers from around the world, both human and animal,” said producer Nicole Field.

There will be big cats, a Human Cannon Ball, hand-balancers, acrobats, magic and more. And of course, be prepared to laugh at the hilarious clowns.

Campus Circle had the chance to talk to one of the Ringling Bros. clowns: Genevieve Flati. The SoCal native tells us what she and the circus team have in store!

Campus Circle: How’s the tour back in the East and in the Midwest?

Genevieve Flati: It’s going really good. ‘Built to Amaze’ goes for two years, and I think everyone is enjoying it because it’s a very modernized circus. It’s really contemporary with the songs, show and pre-show music. So I think people are just really having a good time, both the audience and cast.

CC: Talk to me about your specific role/character you portray in this show.

GF: When you go to clown college, they explain to you that a clown is essentially an extension of yourself, so it’s totally not something that’s made up. It’s really about who you are.

When I came to the circus, I noticed so many beautiful girls all dressed up. But I really wanted to be the clown where little girls see that I have braces and glasses and say, ‘I look like that one.’ This is so they can relate to somebody in the show…I really wanted to reach out to those kids who are a little bit of outcasts. So I have glasses, I wear a schoolgirl outfit, and I trip by myself. I’m really awkward the whole show. But it’s really just kind of who I am.

CC: What else can you tell me about the show and the other characters? How fun is it?

GF: We have 111 performers that are all from at least 15 different countries. It’s really fun.

CC: This is pretty much a show for the entire family, right?

GF: This is for anyone: moms, dads, and kids especially. The best part of the show, in my opinion, is the pre-show. It’s an hour before every single show. You can come down to the floor to meet us, to take pictures and to get autographs. We answer questions that anyone may have, the clowns especially. We like just to hang out to make it a pre-show party essentially. It’s really great for anyone.

CC: How does it feel to perform in SoCal (L.A., Anaheim, Ontario)?

GF: Oh my gosh, I’m so excited because I’m from Anaheim actually. I’m very, very excited to come perform in my hometown and see my old high school, my old college. I’m looking to be a representative of Southern California. It’s really cool to be coming to see friends, family and old acquaintances that I used to do theatre with. It’s cool to come back a few years later and say, ‘Hey, I’m part of this huge thing.’ I’m just ecstatic about it.

CC: How important is it for you to be an entertainer and please the audience?

GF: For me, my favorite thing is to make kids laugh. I really connect with kids. And I really enjoy watching the parents let go of any problems they may have in order to watch their kids have fun and laugh…it’s an incredible feeling.

CC: Anything else that you want to add about yourself or the show?

GF: Everyone who lives in Southern California should definitely come out and see us. It’s a great time for anybody, especially college students. All the acts in the show are incredibly amazing. There are acrobatic tricks, fireworks, dancing and a lot of modernized music.

Marvin Vasquez contributed to this article.