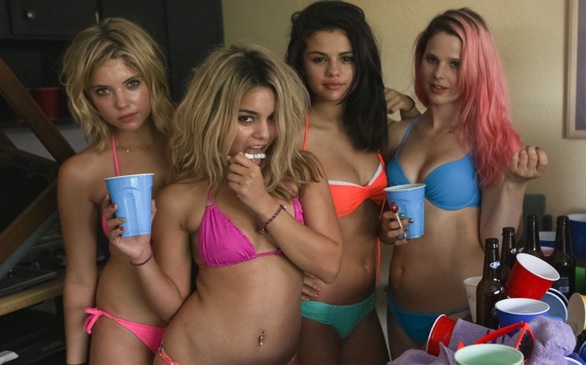 The Majors: Lifelong graduate student, James Franco, takes on a seedier side of the college experience in Spring Breakers. The film affords Selena Gomez and High School Musical star Vanessa Hudgens a chance to play against type, and while it may be the most risque film of either’s career, the movie is a more mainstream work than anyone would think possible from director Harmony Korine (Kids, Gummo). Spring Breakers is slight, but playing a drug dealer with cornrows gives Franco a much-needed chance to shake the self-serious reputation he has developed over the years.

Saiorse Ronan stars in The Host, directed by Andrew Niccol from a book by Stephenie Meyer, the author behind the Twilight series. Since her Oscar-nominated performance in Atonement, Ronan has proven herself the most talented child actor since Jodie Foster, but a simplistic teen drama like this hardly requires a performer like Ronan when someone like Kristen Stewart is all that is required. The film is exactly what one should expect from the writer of Twilight. It has a fantasy storyline that ties everyone together, this time involving aliens instead of vampires.

Tina Fey continues a streak of harmless but disposable comedies with Admission, this time co-starring Paul Rudd. Fey plays a successful professional whose personal life is in shambles (a role that she perfected over her six years on "30 Rock") as a college admissions counselor who attempts to bend the rules to get an unconventional student accepted at Princeton.

Stranger Than Fiction: For nearly 50 years, British television has produced documentaries about a group of Brits, starting at age 7 and producing new documentaries every seven years. The last several of these installments premiered as feature films in the United States. 56 Up, produced by Michael Apted (Gorillas in the Mist, Coal Miner’s Daughter) is the latest installment of the series and has been released as part of a boxed set with the earlier editions. Like the previous installments, 56 Up is a fascinating portrayal of how people’s lives change over the years, and the series gives an interesting template for the reality television genre that it spawned. The 7-year-old kids filmed in the first installment are now well into middle age, and now more than ever they realize how they can exploit the notoriety that comes from a starring role in a documentary.

Nominated for the Best Documentary Film Oscar, The Gatekeepers features six different heads of the Israeli security force discussing their work with the agency, and giving candid assessments of their successes and failures protecting Israel against terrorism. Given America’s recent debate concerning the government’s national security measures, The Gatekeepers is a fascinating look at the compromises a nation makes to keep its people safe.

The Idiot Box: Glenn Close and Rose Byrne face off for the last time in the final season of "Damages." The series once again takes a thinly-veiled spin on recent events, this time with Ryan Phillippe as an online activist clearly based on Julian Assange. However, the real pleasure of the series, as always, is Close’s turn as the world’s most wicked attorney.

Orphan Black, a surprise critical hit in the United States from BBC America, features Tatiana Maslany in one of the most acclaimed television performances of the year. The show may not appeal to Anglophiles who made "Downton Abbey" a cultural phenomenon in America, but the multiple roles for Maslany provide a great showcase for the actress.

Blu Notes: The classic Mel Brooks comedy The Producers gets the Blu-ray treatment, featuring a documentary about the making of the film plus a retrospective on its director’s career. Even after 45 years, The Producers is still one of the most audacious comedies ever made, and even if some of the late '60s material seems a bit stale, the performance of “Springtime for Hitler” is one of the funniest scenes ever committed to film. Brooks himself gave the most accurate review of the film when he proudly proclaimed (in response to charges that the film was vulgar) that the film “rose below vulgarity.” While Brooks may be known for his lowbrow jokes, The Producers is astonishing for its range of humor, veering from fat jokes to referencing Dostoyevsky within a single scene.