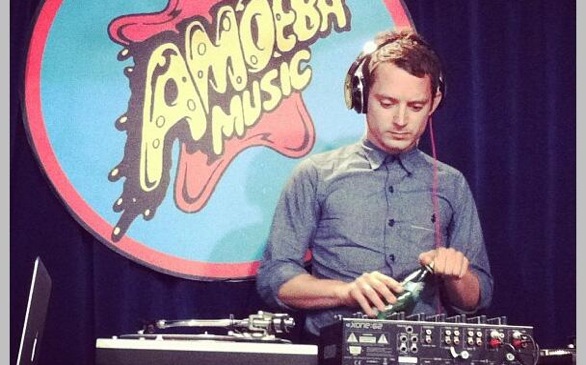 History is constantly repeating itself, especially when it comes to music. Instead of developing an entirely new sound, musicians often look back to previous movements for inspiration, while adding their own personal flare. In this spirit, it was a revival of '80s dance music at Amoeba Records on Wednesday with DJ Jamie Starr and Heloise & the Savoir Faire.

It was a shock for many of the Amoeba customers to see, amidst their vinyl wanderings, what appeared to be a certain recognizable “hobbit” on stage, fine-tuning his turntables. That’s right - it was Elijah Wood, under his side-gig pseudonym, DJ Jamie Starr, queued up and about to lay it down shire style.

Once the vinyl got rolling, Wood was like a misfit teenager, listlessly spinning records in his parents’ basement. He seemed blind to the flocks of curious customers watching. Instead, he just played song after song of '80s dance pop, such as “Crush on You” by The Jets. Wood feebly gyrated and bobbed his head in between sips of Perrier as he tapped harmoniously to the synth pop tracks on the keys of an imaginary keyboard.

Near the final moments of Wood’s set, Heloise peered her face (complete with a cartoonish grin and birthday cake makeup) from behind the curtains. She emerged and saluted Wood with a sloppy kiss on the cheek. Before belting out tracks from her new LP Diamond Dust, the blonde firecracker, clad in a leopard print leotard, addressed the crowd: “Are you wearing comfortable shoes? I don’t care if you are or if you’re not, but you better start dancing!”

Despite performing solo (the rest of her band was absent), Heloise stirred up the crowd with her high-intensity and synthy pop ballads, like a '80s exercise class. She even whipped out her iPhone to execute a twanging guitar solo from an app.

During her set, one of Heloise’s massive false lashes had begun drooping down her cheek. But by the time Wood came back to close out the show with tribal techno (and a minutely more animated demeanor), Heloise reappeared with composed charisma (and lashes), ready for photos with her fawning fans.