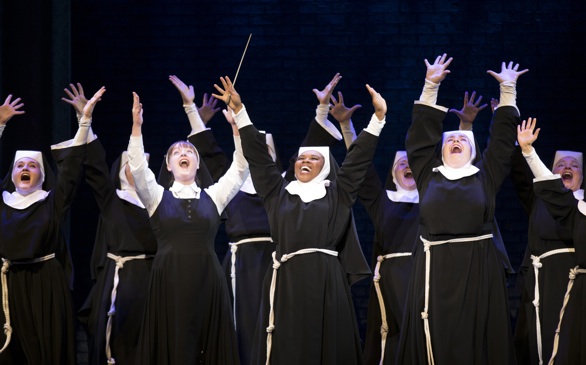 Anyone who came of age in the '90s fondly remembers the Whoopi Goldberg blockbuster comedy about a lounge singer who hides out in a convent and inadvertently becomes the choir director for a bunch of out-of-tune nuns. Sister Act was a charmer, loaded with plenty of sass from the Oscar winner, some sweet laughs and a soundtrack that converted several Motown hits into a collection of church-friendly hymns. Come on, who hasn’t broken out into an impromptu rendition of “I Will Follow Him” every once in a while?

The stage musical, produced by Goldberg along with Stage Entertainment and Troika Entertainment, takes some liberties and makes some slight renovations.

First, 1992 San Francisco is swapped out for 1978 Philadelphia, allowing for a more disco-fabulous sensibility to Alan Menken’s familiar yet friendly score and Glenn Slater’s clever yet effortless lyrics. That may also explain the "Dreamgirls"-esque opening that introduces us to wannabe diva Deloris Van Cartier. Ta’Rea Campbell ("The Lion King," "Book of Mormon") takes on the demanding role, and the Tony-nominated actress revels in each performance and she commands on stage, especially during Act 2’s titular ballad.

Gone are the film’s Reno showdown and FBI agent who leads Deloris to safety. Instead, we get E. Clayton Cornelius as Eddie, the cop who’s crushing on the eyewitness he’s protecting, and Curtis Jackson (Kingsley Leggs) as the gangster who will do anything to track down our girl. In Act 1, Curtis breaks out into the semi-sadomasochistic anthem “When I Find My Baby,” a laughable theme song for any villain if there ever was one (laughable in a good way, that is).

Speaking of villains, Curtis’s cronies (Todd A. Horman, Ernie Pruneda, Charles Barksdale) also get some time dedicated to their own vocal theatrics in the number “Lady in the Long Black Dress.” It’s a humorous attempt to channel Barry White that surprises in the middle of the production.

Nearly every major character gets his or her chance to shine. Stage veteran Hollis Resnik, as Mother Superior, delivers the pleasantly melancholy “Haven’t Got a Prayer,” while Lael Van Keuren admirably grabs the spotlight in the empowering “The Life I Never Led,” a shout-out to all the wallflowers in the audience.

However, it’s the rousing crowdpleasers that attempt to raise the roof – and everyone’s spirits. “Take Me To Heaven” and “Sunday Morning Fever,” an obvious nod to definitive disco track “Saturday Night Fever,” bring on the smiles. "Spread the Love Around” closes the show in a rainbow-colored, stained-glass fantasia of fun accentuated by some sparkling costume design (thanks to Lez Brotherston) and flamboyant stage work.

"Sister Act" the musical – while never groundbreaking – is still a crafty concoction that takes a dip in the nostalgia pool and uplifts, which is never a bad thing.