Catching Up with The Neighbourhood on Tour: Drummer Bryan Sammis tells us about life on the road and more! 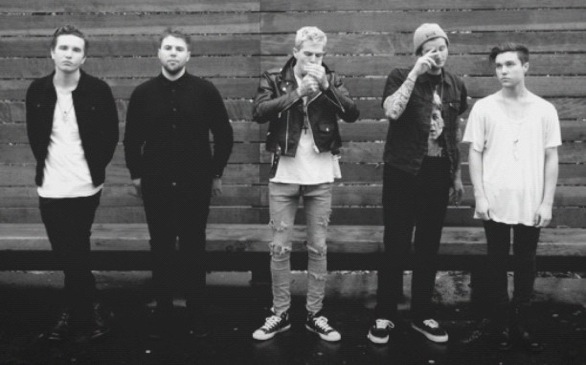 Since its single “Sweater Weather” charmed its way onto Top 40 charts and slowly became the unofficial sex music of summer 2013, The Neighbourhood has encountered virtual overnight success.

These L.A. natives may not look the part of your average indie pop group, but they have definitely made a name for themselves in the short amount of time they’ve been on the music scene. And they have no plans for stopping anytime soon – they’re already hard at work on the next album.

Campus Circle had a chance to speak with drummer Bryan Sammis from the road about the band's success thus far.

Campus Circle: Can you tell me how you guys started as a band?
Bryan Sammis: We were all in local bands around the same area, and we just decided to try something new. We’re all friends – our bands had played together and stuff like that, and a couple of the guys grew up together. So we decided to try it out, and it worked out really well.

CC: Who are your influences? What are your favorite songs right now?
BS: Favorite songs out in the world right now? I guess I could do some personal favorites…I think that Drake’s new song “The Motion” is really good. I also think Chance the Rapper’s “Cocoa Butter Kisses” is a good song.

Obviously we all grew up listening to different things that influence how we ended up playing music, but as far as the band goes, we don’t really look to anyone else to do similar stuff. We kind of saw a void in the music industry for this type of music that we wanted to make, so we decided to make it. I don’t necessarily think that anybody’s doing exactly what we’re doing right now.

CC: How would you categorize your music, in terms of genre?
BS: I think that an easy way to describe it is “dark pop.”

CC: What has it been like to be out in the crowds at festivals like Lollapalooza and Coachella, to actually being on stage and playing them?
BS: It’s a great feeling, and that’s actually one of the main reasons that we started this band – we were at Coachella a couple of years ago and saw a couple bands play and got really inspired. So to come back a few years later and play it is a great feeling.

CC: What is a typical day like on the road for you?
BS: We don’t have too much time to really just hang out. A lot of it is just driving. I mean, obviously when we play in places like California or New York we’ll typically get a day off or two and get to see some friends. I have a lot of family on the east coast so when we play there, I get to see a lot of them. But there’s a lot of misconceptions about touring– that you get to travel the world and get to see all these different places - but you only get to see places for a brief amount of time before you have to leave and go somewhere else. So, you really don’t get to soak it in as much as you’d like. But I’m sure as you grow as a band, with time comes more days off and more opportunities to see different parts of the world and hang out there.

CC: Have you encountered any sort of backlash from other artists in the industry for being so young and successful at such an early time in your career?
BS: I don’t know about other people in the industry. If people feel that way within the music industry, I don’t know who they are. But it’s definitely happened before where someone comes to a show or someone meets us, and we’re not necessarily what they’re expecting. Maybe they were expecting some older people and maybe not so heavily tattooed. But it’s fun - I think that’s good. I think we’re breaking the mold of what people think that we are supposed to look like. I don’t necessarily blame anyone for having preconceived notions of a band, but I think that when they meet us we have the opportunity to change their minds.

CC: Who would you like to go on tour with?
BS: If the Gorillaz toured again, I’d have to go with them. Or if the Cardigans decided to tour again. Or maybe something a little more diverse – like I said, I’m a big Drake fan. Drake would be great. Or anyone in that field – I really like J. Cole’s new album. Touring with him would be awesome.

CC: What are your hopes for the next album?
BS: We’re actually already working on it. That’s just how we are - we’re young and we’re hungry for all this stuff. We’re constantly making new music. I think that as we grow as people and as we grow as musicians, our abilities just naturally get better…the songs that we’re writing now are definitely a step up from what we’ve done before, but they’re also a little different. You don’t want to put out the exact same record you just put out. I’m hoping that people recognize the growth that we made and continue to grow with us.

The Neighbourhood will be performing in Los Angeles at The Fonda on July 15. Follow the band @thenbhd.