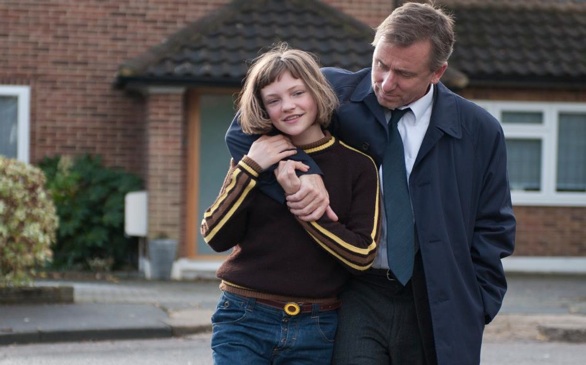 Despite daily injections of insulin to mollify her severe disease, Skunk is just an 11-year-old girl frolicking in the bliss of childhood innocence. She and the other English boys and girls have just been released from the shackles of school for summer break. However, amidst daydreaming about boys and exploring junkyards, Skunk is forced to taste the bitterness of growing up.

Skunk, impeccably played by Eloise Laurence, is attempting to grasp the complexities of the human condition. Her father Archie (who is played by Tim Roth) simultaneously tries to protect his daughter’s fragility while coping with a wife who has run off with another man.

“The film is seen from inside the child’s world,” said Roth. “We’re all satellites. We circle around Skunk and her world.”

When Mr. Oswald, a violent neighbor, receives false information claiming that his daughter has been raped by Rick, a gentle but troubled resident of the cul-de-sac, Skunk witnesses a horrible sight. Oswald brutally beats the supposed assaulter, sending Rick to the hospital and further into the depths of madness.

This is Norris’ first time with film but not his first in the director’s chair. He has traditionally directed theater productions, but his skills have effortlessly traversed mediums.

“When we were discussing the scenes, it was clear that I was dealing with an intellect, a very creative mind,” said Roth. “It was fascinating to work with him.”

Laurence was also a first timer on the silver screen. Looking at her seamlessly executed pilot role, a tomboyish preteen in Broken, it’s clear that a burgeoning career is in the making.

“This girl was a natural,” said Roth. “I watched her figure out the acting game fairly quickly, and she wasn’t arrogant. We got on so well, me and her.”

As for Roth himself, he’s an acting veteran, but his role in Broken is very different from the roles he’s known for. Movie fans typically recognize Roth for his roles in Quentin Tarantino’s fantastically fierce films—like Mr. Orange who saves the cop from burning alive in Reservoir Dogs or the opening robbery scene set to Dick Dale’s “Misirlou” in Pulp Fiction—not roles as a caring father.

Aside from his most remembered roles, Roth likes to dabble with the types of characters he plays. “I keep experimenting,” he said. “That’s how I stay interested.”

And experimenting he has done. He’s done a wide variety of parts spanning from the Tarantino films to crime TV shows like “Lie to Me,” indies like Broken, big-budget Hollywood films like The Incredible Hulk, a skinhead in Made in Britain and a drug addict alongside Tupac Shakur in Gridlock’d.

“It doesn’t really matter if the budget is tiny or if it’s huge,” said Roth. “Scripts come through the door and if I like them, I’ll do them.” He added that,  “You do have to do the films that will get the kids through school.”

Next to his role in Tim Burton’s Planet of the Apes (2001), Roth’s involvement in Broken (which premiered at Cannes Film Festival in 2012) probably didn’t contribute significantly to his two boys’ college fund. However, his portrayal of a charming father confirmed the longtime actor's versatility.

“I play nice guys, but they don’t often get noticed,” said Roth. “[Archie is] a really kind and gentle man, and then the worst thing in the world happens. I wouldn’t mind having one of those guys living on my street.”

In Broken, this seldom, simple transition from unsullied childhood to brutally aware adulthood is spurred by a summer of tumult, which Skunk unknowingly nestles right in the middle of. Still, the love that Roth’s character has for his daughter is so piercingly strong that it outshines the struggles that the family must endure.

With the beautiful simplicity that is characteristic of indie films, Norris’ Broken shows that as long as love and support are present, we can make it through anything.