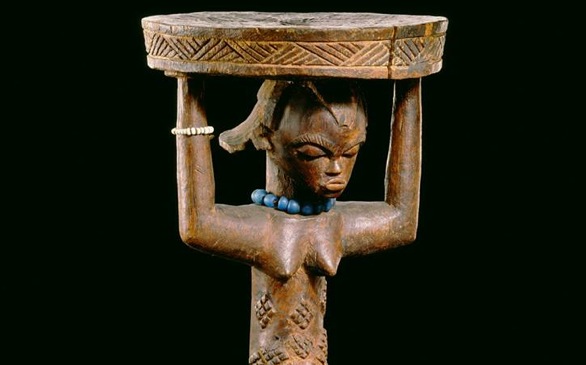 One shudders with every nearby shuffling when looking at Aimé Mpane’s Congo: Shadow of the Shadow. In the middle are 4,652 matchsticks, delicately pieced together to form a male figure looking down at a cross inscribed with “1885.” This year signaled a tragic regime of African colonialism initiated by the Berlin Conference, which partitioned the continent into territories.

“King Leopold II took the Congo Free State as his personal possession,” curator Dr. Mary (Polly) Nooter Roberts related. “With its remarkable interplay of the simultaneous fragility and resilience of the human condition, [it] addresses the shaping and re-shaping of power.”

Mpane, a Congolese artist, finished the installation in 2005. It stands as a contemporary counterpoint to the 19th century sculptures displayed in Shaping Power: Luba Masterworks from the Royal Museum for Central Africa, an exhibit that launches LACMA’s new gallery dedicated to African arts. With bubbling pride, the museum’s CEO, Michael Govan, gave the opening remarks at a recent event to celebrate the milestone.

Dr. Roberts, lithe, elegantly suited and modishly accessorized, then led a tour of the exhibit she helped put together. The professor spent almost two years living in Congo’s Luba communities for her doctoral dissertation specializing in African arts, and she earned her Ph.D. in art history from Columbia University. Now a faculty member of UCLA’s Department of World Arts and Cultures, the professor spoke excitedly of the otherworldly artifacts.

“If you think about all the icons on the surface of a smart phone, every single one of them takes you to worlds of knowledge!” she said, brandishing her black iPhone.

She compared the iPhone to the 13-inch Lukasa, or memory board, which more resembles a tablet computer, except mystically cryptic and made out of wood, embellished with glass beads, acacia thorns and metal. This, along with skin scarification not unlike modern tattoos (although the latter must be less painful), elaborate cosmetic practices and empowered gender roles (sculpted female figures adorn objects from scepters to spears), illustrate that 19th century Luba arts prove to be telling of contemporary culture.