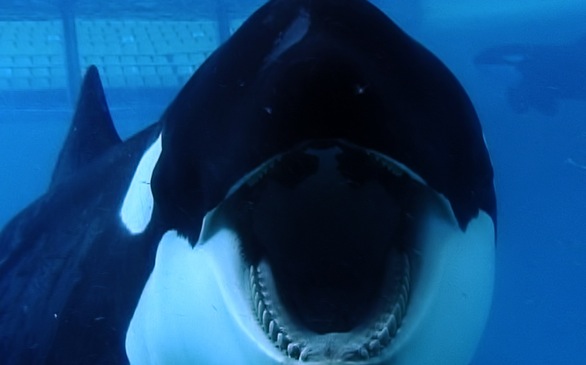 Tilikum in a scene from Blackfish, a Magnolia Pictures release.
(Credit: Suzanne Allee)

Blackfish, directed by Gabriela Cowperthwaite, is a shocking documentary about the truth behind orcas (or "killer whales") that are held in captivity. The film is both eye opening and heart wrenching, as it takes you through decades of these orcas’ activities and tries to figure out why these whales have caused multiple deaths throughout the years.

During production for Blackfish, SeaWorld repeatedly refused to be filmed and quoted for a statement. However, SeaWorld recently released its reaction to the film, calling the documentary, “shamefully dishonest, deliberately misleading, and scientifically inaccurate.”

Nevertheless, the film strives to tell the story of all killer whales in captivity. In particular, it highlights Tilikum’s story, as this 12,000-pound whale has been involved in more deaths than any other killer whale in captivity.

Tilikum is a bull orca that was captured as a baby in the early 1980s. Older female whales apparently bullied Tilikum during his time at the Sealand of the Pacific aquarium in Canada, which is where he killed his first victim: trainer Keltie Byrne in 1991. After this attack, Tilikum was sent to SeaWorld in Orlando, Fla., where his confinement to a small tank, in addition to the ongoing bullying, most likely enhanced his aggressive personality.

At SeaWorld, Tilikum has been involved with two other deaths, including SeaWorld expert trainer Dawn Brancheau in 2010. The film claims that one of the main reasons SeaWorld has continued to keep Tilikum in captivity is because he is a stable supply of sperm to help all of the female orcas get pregnant. The documentary also points out the troubling fact that Tilikum, one of the most aggressive whales in captivity, is the father of multiple orca calves. Even more troubling, however, is the fact that even after all of these incidents, Tilikum (along with other whales involved with injury to humans) are still performing at SeaWorld.

From the commercials and other corporate propaganda, SeaWorld may seem like it is the ideal environment for animals like the killer whale; however, marine life experts testify that whales’ life spans in captivity are significantly shorter than those in the wild, despite what SeaWorld wants you to believe. Blackfish takes you behind the smoke and mirrors of SeaWorld’s extravagant displays and introduces you to sources that know the whales better than anyone else: former SeaWorld employees.

Multiple former SeaWorld trainers and employees go on camera to reveal how self-deluded they were by thinking that they were in no danger working with killer whales. In their interviews, they explain how SeaWorld further enhanced their delusions by downplaying trainer injuries and attributing almost all of the killer whale attacks to a “trainer error.” The most thought provoking part of the documentary occurs when one interview subject reflects on how little humans have truly learned about orca behavior in the 20-year span between Byrne and Brancheau’s deaths.

Overall, this film will bring out the animal activist in you, and you will definitely think twice about visiting an animal park after watching Blackfish.

Blackfish releases in theaters on Friday, July 19 in Los Angeles at The Landmark in West Los Angeles and Pacific’s ArcLight in Hollywood. On July 26, the run will expand to include Regency’s South Coast Village 3 in Orange County, and the film will continue to roll out nationally.