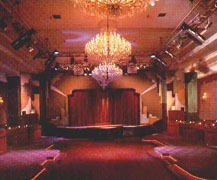 On any given night in Los Angeles finding something to satisfy the eclectic music tastes of its locals is easy. That’s because L.A. has got it all.

Here, in the center of the entertainment industry is a thriving music community, where countless national and international acts are drawn each day. Some of L.A.’s music venues, which host these acts, are just as legendary and culturally significant as the acts that have played there.

As one of L.A.’s oldest clubs, what sets the Troubadour apart from other local music venues is how essential it still is today. Music lovers appreciate the opportunity to catch future megastars before they make the jump to the big time.

The Troubadour built its reputation around hosting rock bands and singer-songwriter types. And after the wave of ’80s hair metal glam bands it became the breakthrough venue for acts such as No Doubt and the Killers.

The venue is an all ages club which means it sees crowds of various ages but the full bar allows those of legal age to feel at ease next to the troubled-youth types.

The Roxy is that place your parents have fond memories of as a teenager, and it’s likely you’ll share that same sentiment with your children some day as you reminisce about your first rock show. From the pierced and tattooed to the preppy and well-dressed, all types of music lovers frequent this club.

Although the Roxy is not best known for its quality sound, the Roxy itself has become somewhat of the CBGB’s of L.A – a legendary Hollywood stop for the who’s who of rock music. Even numerous rock ‘n’ rollers such as the Ramones, Social Distortion, Bruce Springsteen and Bob Marley have all recorded and released, live at the Roxy albums.

When it first opened in 1926, the Henry Fonda Theater frequently was the host to silver screen legends like Clark Gable. Since then, renovations have gone underway and today it has returned to its glamorous past

The main floor offers standing room only, which creates a welcoming intimacy. The upstairs leads to a rooftop patio where you can take a smoke break, and check out the view of Hollywood Boulevard. The balcony seating offers the premiere views of the stage and the plasma television sets only add to the concert experience.

Driving down La Brea Avenue, it’s impossible to miss the El Rey’s marquee. In fact, it’s one of the highlights of the Miracle Mile area.

Walking inside the old movie theater is like taking a step into a time warp. It’s been around since 1936 and by the looks of it, the interior probably hasn’t changed all that much since the place was transformed into a live music venue. With its rich red décor, cushy couches and cabaret-esque style, the El Rey gives off a certain charm not found in any other local music venue.

Today, you can catch just about anything here, from rock bands and hip-hop outfits to the annual Velvet Hammer Burlesque show. Live shows usually go on early, leaving time for it to fill back up with a dance-club crowd later in the night.

Formerly known as the Palace, the Avalon is one of the largest clubs in Hollywood. The classic Hollywood venue, was once the host to greats such as Lucille Ball and Louis Armstrong.

As the Palace, it was beginning to look a bit run down, but recent renovations and additions to the place have brought in a more modern-day style. Today, the Avalon has its finger on the pulse of the rock scene. Any music fan will find it a wonderful place to fully take in the concert-going experience.

Spaceland is the place where indie darlings and garage rockers who have yet to hit the big time, perform. It’s most crowded on Mondays, when the monthly residencies by bands and free admission draw a lot of locals.

Musicians, writers, artists and others with odd haircuts meet to mingle and check out everything from experimental noise ensembles to rising alt-rock stars. It’s a well-documented fact that Beck played many early shows here.

For the out of towners, this building is a cultural monument in itself. Its art deco architecture is still intact from Hollywood’s golden age.

Although the Wiltern has been featured in many films over the years, it’s best known for hosting concerts. Believe it or not, even the Rolling Stones have played here – long before they were selling out 80,000 capacity stadiums.

The slanting five-tired floor is great for standing room only. And balcony seating is still available for those who choose not to get down and dirty with the loud and rowdy rockers.

Although the House of Blues is a nationwide chain, it’s still a Sunset Strip favorite. This restaurant, bar and music venue combo is not just for singing the blues, but a place that’s about diverse as California itself.

The House of Blues has great lighting, sound and is just the right size venue. It’s small size gives off an intimacy of a smaller venue, but has the production value of a larger one.

While it’s much newer and not as grungy or as run down as most other staples in Los Angeles, the Knitting Factory is still a prominent addition to the scene.

It’s a place that thrives on bringing in both local and national acts with varying degrees of success. While it will probably never reach the same status as the New York original, it’s still a nice addition.

Hotel Café is a bit of a deviation from the standard Los Angeles clubs, but quickly this place has grown into the ideal place to catch up-and-coming singer-songwriters.

The atmosphere is extremely friendly, honest and intimate. The venue is warm, comforting, and prides itself on being a place where anyone can come to and feel right at home.
Article posted on 12/19/2005
This article has been viewed 2343 times.