The Ineptitude of the Student Loan Machine: Washington D.C. vs. Students 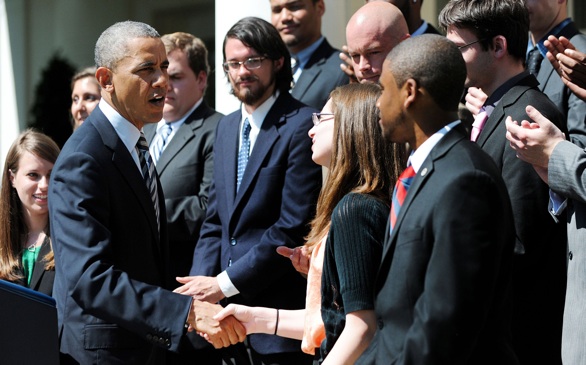 Obama spoke at a news conference in May, tried to stop interest rates from doubling. It didn't work.
(Credit: Olivier Douliery/Abaca Press/MCT)

A new education bill passes into law nearly every year. These laws have helped a lot of people who, in different circumstances, couldn’t go to college. However, these laws also created a complicated system full of loopholes.

This is the dilemma: entry level, medium waged, white-collar jobs all require that a potential employee have at least a bachelor’s degree. Some have even bumped it up to a master’s. As a result, students may take out loan after loan for four years with a plan to pay off the loan(s) after college once they get a job. If they don’t, the bills pile up.

Harvard University started its own student loan program in 1840, more 200 years after its inception as “New College.” The program may have seemed like a novelty in the middle of the 19th century when education itself was a novelty. Status quo remained relatively unchanged—save for the creation of the Department of Education in 1867 and the passage of the G.I. Bill in 1944.

However, on July 1, 2013, the interest rates on new subsidized Stafford loans doubled from 3.4 percent to 6.8 percent, making it even more difficult for students to afford college.

United States businesses, corporations and governance all put a premium on the need for higher education—which is what makes high college costs so objectionable—but they also place roadblocks in the way and red tape on the degree. We’re long past the days when tuition used to cost less than what a cell phone bill costs today. Thus, we either need to scrap our fetish with education or fix the financial aid system. The former is unreasonable, but the latter is possible.

A proposal to make education free for everyone, as if it were Canadian healthcare, would likely be deemed as Marxist, Leninist or socialist (or any other “ism” one could think of). A proposed solution is the Bipartisan Student Loan Certainty Act:

“This proposal sets the interest rates on all new undergraduate Subsidized and Unsubsidized Federal Stafford loans to the most recent U.S. Treasury 10-year borrowing rate, plus 1.85 percent to offset the costs associated with defaults, collections, deferments, forgiveness, and delinquencies.”

This would mean that a loan taken out today would be fixed at the current U.S. Treasury rate (0.47 percent) plus 1.85 percent for a rate of roughly 2.3 percent. If that sounds too good to be true, it’s because it is.

While a loan taken out today would have that rate, one taken out the next day could have a different rate. And because only the consolidation loan would have a cap of how high it can get before stopping—at 8.25 percent—rates could go well past the 6.8 percent it is now for future college students.

According to the Associated Press, there was another bill that was similar but had a cap at 8.5 percent and an interest rate of 2.5 percent. It already died in Congress was similar, but this bill also would’ve been no good.

In April, President Barack Obama offered a suggestion, which would’ve delayed the inevitable interest rate increase to the current 6.8 percent. That obviously didn’t work. The sequestration debacle comes to mind when looking at what just transpired.

None of Washington’s proposals have been adequate. The reason is because people are tired of paying for something they essentially need. You can’t charge a fish for the water he swims in.

The best method of handling costs is a grant that covers all fees. However, most people don’t get that so without universal education, loans are here to stay. The best way loans have been handled, though, comes not from our lawmakers in D.C. but from Portland State University.

Oregon legislators passed a bill earlier this month that allows students to bypass tuition and fees in college and pay for it after they graduate and get a job. They pay back 1.5 to 3 percent of their salary for 20 years. It's called “Pay Forward, Pay Back.”

Students at the University of California, Riverside created their own version of this called Fix: UC. Fix: UC is similar to the PSU model but with a 5 percent hold throughout payment. The program has been lauded by students and lawmakers but won’t work without the federal government backing it.

Despite the ingenuity students from Riverside and PSU have shown regarding education, some people are beginning to wonder if college is worth the cost. With recent trends, it would seem it’s not, but what other option does a nation of intellectuals have? Poor people need it to climb the social ladder, and the middle class needs it to either stay steady or ascend.

Washington has long reached out their hand to students with half a heart; now would be the time for Washington to give them a hand with a full heart.