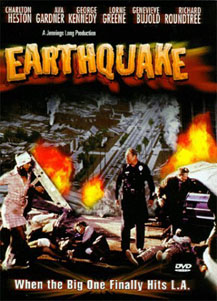 Untitled Document You see the title of this article and immediately think of the movies Chinatown, L.A. Confidential, L.A. Story and several others that always appear on these top 10 Los Angeles movies lists. That is the very reason why these movies will not be appearing here. It’s time to update the boring old "Top 10 Must See Films Set in L.A." list with some fresh titles, new and old, as compiled by a true native Los Angelino.

Nothing says "I love L.A." like a major earthquake. This 1974 classic, starring Charlton Heston, Ava Gardner, George Kennedy and Lorne Greene, plays like a syrupy soap opera that’s suddenly ripped apart by a natural disaster. And we’ve always wanted that to happen, right?

When the film originally opened at Grauman’s Chinese Theater in Hollywood, heavy bass speakers were placed on the floor so the 1600-watt sound system could replicate an earthquake experience for the audience.

No, we don’t normally go around sticking bananas in each other’s tail pipe, but Martin Brest’s police thriller/comedy does present a fairly accurate look at Los Angeles’ rich and famous in the ’80s as a streetwise cop infiltrates their ranks and takes viewers on a journey through the land of the Beautiful People – Beverly Hills.

Eddie Murphy, as Axel Foley, gets you into some of the poshest clubs, hotels, art galleries and tells a few jokes while doing it.

Way more than your average teen sex comedy, Fast Times shows us what life was really like for teenagers in the ’80s as seen through the eyes of Rolling Stone journalist masquerading as high school student Cameron Crowe.

But more importantly, for our purposes here, Fast Times serves as an amazing tour through the San Fernando Valley, which, quite honestly, hasn’t changed all that much since this film’s release in 1982. The most notable difference is that the Sherman Oaks Galleria, where the film’s many mall scenes were shot, was torn down, mostly due to the 1994 Northridge earthquake, to be resurrected as an open air marketplace.

David Lynch’s mysterious head scratcher is a swirling journey to the heart of Los Angeles that reveals the city of dreams as an oftimes factory of nightmares.

A would-be actress moves to Hollywood only to find herself distracted by a beautiful amnesiac who wanders into her apartment after surviving a major car accident on popular tourist point of interest Mulholland Dr. Her dreams are put on hold as she focuses on getting to the bottom of this woman’s mystery, an adventure that takes her into the darker side of L.A. A wicked but beautiful trip.

THE DECLINE OF WESTERN CIVILIZATION (1981)

Experience a major era in music history, the Los Angeles punk rock scene in the ’80s, without running the risk of having a beer bottle smashed over your head. Penelope Spheeris’ classic punk rock doc takes viewers on a tour through some of LA’s most notorious music clubs, some still standing, some only a memory, but all sustaining damage from bands such as Fear, the Germs, the Circle Jerks, Black Flag and X.

Get to know the City of Angels with tour guides Michael Mann and Vincent, the professional killer. When Vincent finds himself on the job in Los Angeles and without proper transport, he hijacks a taxicab and its driver to take him to five different locations in the bustling city to make his contracted hits.

Shot mostly on digital video, Michael Mann takes viewers on a harrowing ride from one end of Los Angeles to the other. And it’s the real Los Angeles, the city that most of us live and work in, not the Hollywood Hills and beaches that tend to make it into way too many films set in L.A.

A classic Hollywood success story is graphically revealed in this documentary as movie business legend Robert Evans tells of his time spent as actor, producer and, eventually, chief of production at Paramount, overseeing such films as The Godfather, Rosemary’s Baby and Chinatown. And then came all the cocaine in the ’80s and … crash.

Pre-dating Boyz n the Hood by three years, Dennis Hopper’s Colors is the OG modern street gang movie, causing shootouts and riots in theaters when it opened in 1988.

Hopper’s film offered an arguably realistic (Malachai from Children of the Corn as a vato?) portrayal of life on the East Los Angeles streets during the furious war between the Bloods and the Crips, two legendary rival gangs who have since kissed and made up and released a rap album together. Los Angeles is about the love after all.

Damon Packard’s cult classic takes viewers on a hallucinatory nightmare journey through the streets of Los Angeles. LA’s penchant for aggressive behavior and random violence is exposed and grossly exaggerated, juxtaposing it with our blinding obsession with pop culture, as an overweight watch hustler wanders the city aimlessly, eventually winding up at Universal Studios and ultimately landing him on the Viper at Six Flags Magic Mountain as he searches for the ghost of his dead sister.

As consistently mindbending as this film is, it’s perhaps the most thorough trip through Los Angeles a filmmaker has ever given us.

AND DON’T FORGET THESE: