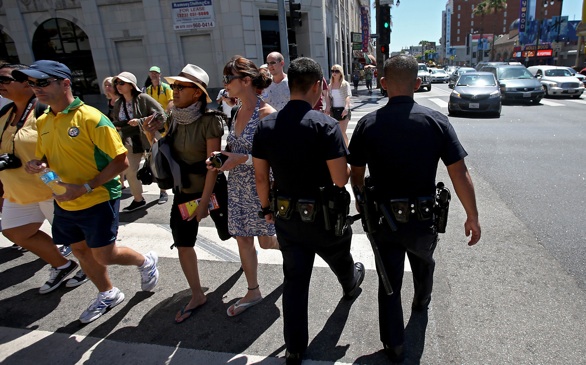 LAPD beefs up presence around the intersection of Hollywood Blvd. and Highland Ave. in Hollywood.
(Credit: Luis Sinco/Los Angeles Times/MCT)

This past week, there have been multiple "bash mobs" in Southern California. In areas and cities such as South L.A., Hollywood, San Bernardino and Victorville, roving groups of individuals have demonstrated organized crime, attacking innocent people and businesses.

On Monday, a group of young people stormed a L.A. Wal-Mart on Crenshaw Boulevard, and on Tuesday thieves rushed down Hollywood Boulevard, harassed tourists, stole phones and vandalized shops. Organized through social media, these "bash mobs" have been a problem in other states (Chicago, Philadelphia and Washington), but are becoming an increasingly alarming problem in SoCal.

Local News
New California law will redefine who is an employee. What does it mean for workers and businesses?
739 views