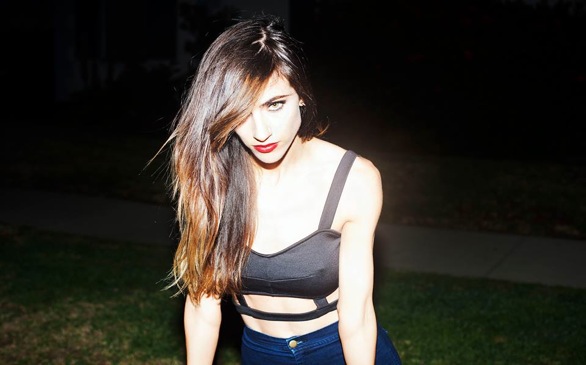 Nylo's sound has been compared to the The Weeknd's.
(Credit: facebook.com/HateNylo)

Her manger introduced me to her as "Superstar." The name "Nylo" might not ring amongst the legends, but she does carry a presence that could move the masses.

The journey began well before Nylo’s show even started. Finding the venue was a trip in itself. If it wasn’t for a Google image that looked like it was drawn by a 5-year-old, I don’t know if I would have found the place. Tucked away in a back ally next to Paramount Studios off Melrose lies one of L.A.’s best kept secrets: Amplyfi. The tiny music lounge dips beneath the radar and charms its fans with a setting that is both intimate and exciting.

As I opened its unique back door entrance, I was met with an unfamiliar sound: a soft rock voice that rang with a pop metallic backdrop. The singer was Kelly Sweet, a stunning 24-year-old who resembles a more well-put-together Miley Cyrus. Her vocals whisked the close crowd as her smooth melodies warmed hearts, an unexpected surprise.

Sweet closed her set; however, Nylo was nowhere to be found to follow. It turns out a band member couldn't perform last minute, and Nylo was left scurrying to her show in panic. The anticipation began to rise until she finally shuffled down the backstairs and made her way to awaiting fans and friends. The room didn't bar her lateness but accepted the artist's imperfection. The big show was ready to begin.

Some say Nylo mirrors a female version of The Weeknd. Her unique R&B, soul, eclectic, gospel feel revels in her rolling voice and keeps fans constantly on edge. “I draw inspiration from Radiohead and James Blake,” she shared after the show. “My music is for women, inspiration for women, for me. A lot has to do with my parents' failed marriage and my own relationships. I make a lot of music for me and for the people.”

As she glowed on stage, her devilish good looks tantalized the audience, as they appeared hidden beneath her humility and grace. Nylo seeks to entertain the soul; her music is from the heart and for the heart.

“Music gave me an outlet. Music healed me, and I want to do it for someone else," she said.

Behind her charming eyes lies a girl who is ready to escape the norm and live life to the beat of her own drum. It is her defining individualism that makes her so likeable.

Then, why does she go by Hate Nylo on all her social media accounts? She revealed, “Nylo translates into ‘to love the most’ and between that and hate, I believe the two capture both ends of the emotional spectrum. They cover everything.” As that name entails, the real Nylo brings a passion and voice that comes from a little bit of everything.

It was a Sunday night sneak away before the chaos of the upcoming workweek. For a moment, Nylo and Sweet made me forget about life outside of Amplyfi, and put me into a more enlightened state. The two had a cunning ability to make our big world seem just a little bit smaller.