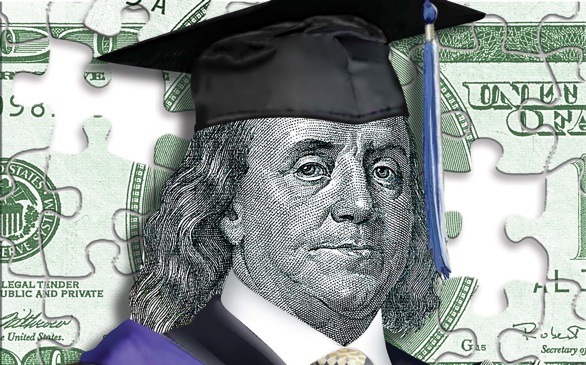 It’s no secret the recession wiped away many Americans’ wealth and savings while altering spending habits. That has changed how many families are paying for college.

A survey released Tuesday by Sallie Mae found that parents are now contributing less of their income for college than they did four years ago.

Instead, families are relying more on grants and scholarships to cover the costs of higher education. They are also cutting expenses from the traditional college experience. Fewer students are living on campus, and they are fast-tracking coursework in order to finish college sooner.

“In this post-recession environment, families overwhelmingly believe in the dream of college, yet they are more realistic when it comes to how they pay for it,” said Jack Remondi, Sallie Mae’s chief executive.

The survey found that scholarships and grants pay 30 percent of college expenses. That’s up from 25 percent in 2009.

Parents have struggled to pay for their children’s education. Now, 27 percent of their income goes toward paying for college — a drop of 10 percentage points since 2009.

The recession has also placed a higher value on getting a degree, the survey found. Eight-five percent of parents said going to college is an investment, compared to 80 percent in 2009.

Still, while attending college is a priority, many parents and their children are balking at attending expensive schools. About two-thirds of families eliminated schools during the application process based on cost.

Students are also tailoring their college experience to be more frugal. Fifty-seven percent of students choose to live at home instead of living in college dormitories, which tends to be more expensive. That’s up from 44 percent in 2011.