Brett Hundley Has UCLA on the Map 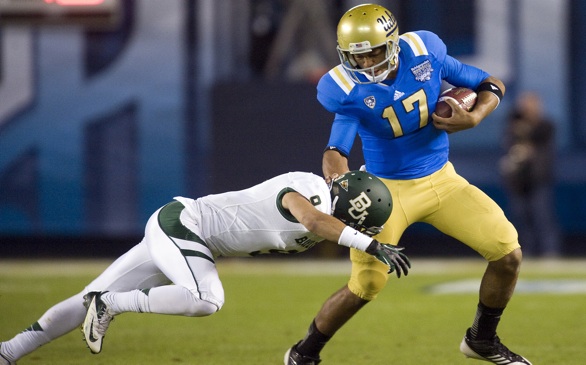 Some were subtle, like the stirring of a breeze.

"There are people I'll see on campus who go, 'Oh, that's Brett Hundley,' but they won't come talk with me," Hundley said, chuckling between bites of pasta at a campus cafeteria. "I'm a regular person. I'm going to talk with you."

"When I first got here, USC was huge," said Hundley, who attended high school in Arizona. "They were running the town for a minute. Now I walk around L.A. and I see UCLA gear rather than USC gear."

He can take at least partial credit for any wardrobe change.

There were heavy expectations placed on Hundley as a redshirt freshman last season and he lived up to the billing. The Bruins finished 9-5 and won the Pac-12 Conference's South Division. Hundley set a school record with 3,740 yards passing, which already has him ninth on UCLA's career list.

Heisman Trophy trackers have Hundley on the radar. One online sports book has him at odds of 33-1 to win it.

"They need him to be the face of the program," said Chris Huston, who runs heismanpundit.com, a site dedicated to college football and the Heisman chase. "You need a player that makes kids think of the school. Brett has a chance to be that guy."

Hundley is among the 30 players on Huston's watch list. And Hundley is even higher on a more important list.

NFL scouts, who usually give sophomores a cursory look, are already talking about Hundley being a top-10 draft pick when he decides to make himself available.

UCLA's fan base is completely smitten. Hundley received 89 birthday greetings on his Twitter feed, many offering congratulations for the national championship and Heisman Trophy — neither of which he has won yet, of course.

No wonder there is some tapping on the brakes around UCLA. Too much, too soon seems the concern.

School officials are considering a Heisman campaign, but it's for Anthony Barr, a senior linebacker who is projected as a top-five pick in the NFL draft.

Hundley won't be at Pac-12 media day Friday, either. Schools take two players to the event. UCLA's are Barr and guard Xavier Su'a-Filo.

But the quarterback's impact can't be denied.

The first time Hundley touched the ball in a college game, he ran 72 yards for a touchdown against Rice. By season's end, he had passed for 300 yards five times and had engineered a 38-28 victory over USC — the Bruins' second win over the Trojans since 1998.

Coach Jim Mora believes in the no-I-in-team philosophy — he probably would remove the letter from "Bruins" if he could — but he sees the rising tide.

"I look at Brett Hundley as a guy who may not be a household name yet but hopefully becomes one," Mora said. "The most important thing is we win games. If we win games, guys will get the notoriety they deserve."

The plan has been to bring Hundley along without too much pressure. His teammates voted him a captain before last season, but Mora nixed it, saying "there was already enough on his plate."

More is being added this season. Hundley has become the face of the program — literally. UCLA uses images of Hundley and Barr wherever possible.

"I saw it on a poster the other day,' Hundley said. "That was cool."

School officials also had Hundley call season-ticket holders in May. Other Bruins players also worked the phones, but the school put out a news release that Hundley would be calling.

This is the first time in more than a decade that UCLA is perceived as having the best quarterback in Los Angeles. Across town, quarterbacks Carson Palmer and Matt Leinart won Heismans; Palmer, Leinart and Mark Sanchez were first-round NFL draft picks and Matt Barkley was a four-year starter.

The talk will be about a quarterback competition at USC in August. Across town, the talk is about Hundley.

"UCLA has had a real absence of players who generate the kind of excitement that Brett Hundley is generating right now," former UCLA coach Terry Donahue said. "It's becoming more apparent this guy is really a special player, and maybe a legitimate Heisman Trophy candidate."

Hundley said his ego is "grounded" by his family, but his brand of humility comes with a personality hard to curb. Asked about the Heisman and he replies, "I'm trying to win a championship."

Yet, he adds that the Heisman "can be a byproduct and I would love to get it." In fact, expects to at some point.

Prodded about whether he had thought about an acceptance speech, Hundley said, "When the time comes, I will have a long speech for that day."

So it will happen? "I'm planning on it," Hundley deadpanned. "I'm declaring it. It's going to happen."

"Good for him," said Noel Mazzone, UCLA's offensive coordinator. "I would much rather him say that than say he was working hard to be Pac-12 honorable mention. That would worry me."

UCLA has one Heisman Trophy winner: Gary Beban in 1967. Yale has two.

UCLA's Cade McNown finished third in the 1998 voting and Troy Aikman was third in 1988. Drew Olson was the last Bruins player to get votes, finishing eighth in 2005.

"It should be music to UCLA's ears to hear Hundley mentioned as a candidate," said Huston of heismanpundit.com. "Winning the Heisman is a barometer of your program's health."

Winning it would also shift the terrain in Los Angeles toward UCLA.

"It would be huge for this school," Hundley said. "I'm going to try to do it, or it may be Anthony Barr. Whoever does it, that will be huge for UCLA."