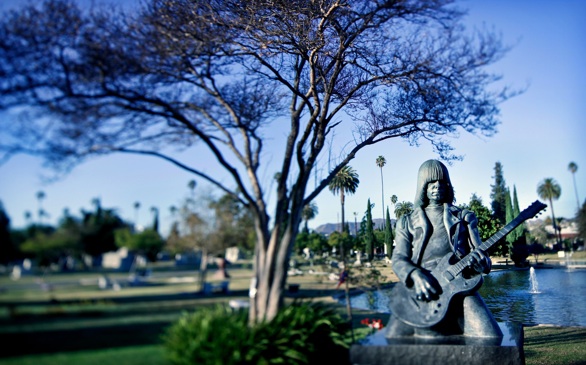 JOHN WATERS TO HOST JOHNNY RAMONE TRIBUTE
The 9th annual Johnny Ramone tribute, a celebration of the life of the late guitarist for the Ramones, will take place Aug. 18 at the Hollywood Forever Cemetery and be hosted by iconic film director John Waters. Waters’ 1990 film Cry-Baby, starring Iggy Pop and former porn star Traci Lords, will be projected onto a 42-foot mausoleum wall along with lots of Ramones footage. Waters and Lords will participate in a Q&A session and also sign autographs. Fans are encouraged to dress up like one of the Ramones, and there will be a look-alike contest judged by Johnny’s wife Linda Ramone and Steve Jones of the Sex Pistols. Music will be spun throughout the cemetery during the event. Admission is $10, and additional cash donations will be accepted; proceeds will go to the Johnny Ramone Research Fund at USC’s Westside Prostate Cancer Center. The cemetery is located at 6000 Santa Monica Boulevard in Los Angeles. www.johnnyramone.com

CALL DISMEMBERMENT PLAN, WIN TICKETS
Their new album Uncanney Valley, their first album in 12 years, won’t be out until October, and their upcoming tour won’t stop in Los Angeles until Dec. 12. However, Dismemberment Plan wants to hear from you now. Give the guys a call at (252) 64-DPLAN (that’s 643-7526) and leave them a voicemail about your favorite D-PLAN memory. You’ll then be in the running to win a pair of tickets to an upcoming show. You can hear “Waiting,” the first single from the upcoming album, at Soundcloud.

FLAAMINGOS
Flamingos usually sport pink plumage, but Flaamingos (the Echo Park-based band anchored by singer Jerry Narrows and guitarist/synth man Daniel Koontz) are much more likely to be spotted wearing all black. The guys have just signed to Felte Records, and the label will be releasing the duo’s self-titled debut effort on Aug. 27. The first single from Flaamingos is the moody “All I Wanna Do Is Live,” and is widely available on the Web now.

EARL SWEATSHIRT’S DORIS
Los Angeles-based rapper Earl Sweatshirt has previously released music on his own Tan Cressida label, but now the imprint has a deal with major label Columbia Records. They’re about to release Sweatshirt’s new album, Doris. Some of the luminaries involved in the making of Doris are Tyler the Creator, Pharell, RZA, Vince Staples, Casey Veggies and Mac Miller. Doris drops on Aug. 20, and you can catch Sweatshirt live at Rock the Bells in San Bernardino Sept. 7 and 8.

MID SUMMER CD RELEASES
If your summer is starting to slow down a little, new music is probably what you need to get things going again. Try these!

Bitchin Bajas Bitchitronics (Drag City) – Doesn’t the name say it all? Well, not quite. The nine-piece group plays synth-based loop and effects-laden music that some call ambient and some call drone, but all call it cool.

Coke Weed Back to Soft (Heavy Friends) – Nina Donghia and guitarist Milan McAlevey take turns on lead vocals on a set of subdued tunes that have their roots in mid-‘60s psychedelic pop.

Fueled By Fire Trapped in Perdition (Noiseart) – Here’s a set of thrash metal for fans of bands like Slayer, Overkill and Testament. Songs like “Pharmaceutical Extermination” and “Catastrophe” pound like hell. On “Defaced Mortality,” guitars howl like the devil himself.

Dana Fuchs Bliss Avenue (Ruf) – Fuchs has a voice that sounds like a female version of Rod Stewart back when he used to rock. Rowdy cuts like “How Did Things Get This Way” tune into the same groove that Stewart’s band the Faces did.

Andy Kaufman Andy and His Grandmother (Drag City) – This is the first (and likely only) comedy record featuring the late Kaufman that’s ever been released. Material was culled from 80-plus hours of Kaufman’s personal microcassette recordings from 1977-79; narrated by Bill Hader of Saturday Night Live fame.

King County Queens Ladies & Gentlemen,Your King County Queens (Green Monkey) – Everyone in this band is named Scott except for bassist Marsh “Not Scott” Gooch. It’s just another trippy aspect of a group that plays garage rockin’ psychedlia with a little bit of grunge thrown in.

The Of Oh It’s the Of (Green Monkey) – Obviously influenced by the outre music of Frank Zappa, The Of plays songs focused on the music and the Zappa-esque guitar work of John Carey; when there are lyrics, they are delightfully weird. The band members often wrap themselves in aluminum foil when playing live.

Pet Shop Boys Electric (X2) – The synth poppers are back on the club scene with this set of deep house bangers. Songs such as “Axis” barely have any lyrics so as not to break up the dance rhythms, but others such as “Bolshy” have sing-along parts and a great mid-song crescendo that make the song perfect for pop radio as well.

Preservation Hall Jazz Band That’s It! (Legacy) – Just last year, this legendary New Orleans band has its 50th anniversary, and this album marks the first time ever that they’ve released an album featuring only songs the band members wrote themselves. Jim James of My Morning Jacket co-produced and sings on “I Think I Love You.”

Nadine Shah Love Your Dum and Mad (Apollo/R&S) – Shah has a very interesting dynamic that mashes up Laurie Anderson, Nico, modern day Marianne Faithfull and, on single “To Be a Young Man,” David Bowie.
Venrez American Illusion (Monarch Music) – On lead track “Unforeseen” Venrez mashes up
Alice in Chains and Guns N’Roses. “Sanctity,” on the other hand, tunes into the formula that Blue Oyster Cult used to achieve radio domination.