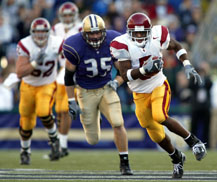 USC’s highlight-making, game-breaking tailback regularly left opponents flailing in frustration and fans gasping with adulation over his exploits on the field, and he did it again in his chase for a piece of college football history.

This time, Bush’s breakaway run resulted in one of the most decisive Heisman Trophy routs ever when he overwhelmingly won the prize awarded to the nation’s top player.

"This is amazing," said Bush, who received the second most points and first-place votes and the largest percent of first-place votes in Heisman history. "This truly is an honor to be elected into the fraternity of Heisman winners."

Bush was the picture of cool in his pinstriped suit until he was announced as the 71st Heisman winner at the Nokia Theatre in Times Square.

He put his head down and took a congratulatory handshake from 2004 winner and 2005’s third-place finisher, Trojans quarterback Matt Leinart. Bush even choked up during his acceptance speech in a rare moment when the USC junior wasn’t in control this season.

Bush became the seventh USC player to win the award, tying the Trojans with Notre Dame for the most by any school and making USC only the third program to have teammates win in back-to-back seasons.

And Bush, who was the first Trojans tailback to win the Heisman Trophy since Marcus Allen in 1981, was USC’s third winner in four seasons along with Leinart and fellow quarterback Carson Palmer.

After all, No. 1 USC has won 34 consecutive games and will play No. 2 Texas in the Rose Bowl on Jan. 4 for the Bowl Championship Series national title, and that likely wouldn’t be possible without sensational performances by Bush.

The junior, who remained steadfast in his insistence that he does not know if he will leave a season early for the NFL, showed glimpses of brilliance upon his arrival at USC in 2003 and became one of the most dangerous players in the nation last season.

It took until this season, though, for him to become USC’s starter at its signature position and more than simply an all-around threat. Bush responded with a career-high 1,658 rushing yards and leads the nation with 217.6 all-purpose yards per game.

"Reggie Bush is a great athlete," said Young, who didn’t try to hide his disappointment over losing the trophy that was his goal all season.

Runners-up in recent seasons have praised the winner publicly and kept their personal feelings private. Bush, for instance, finished fifth last season but complimented Leinart as he plotted his return for this season.

Young, however, talked about how losing, especially by such a large margin, would serve as motivation in the Rose Bowl.

"I’m just basically emotionally upset," said Young, who had only 79 first-place votes to Bush’s 784 and finished 933 points behind Bush.

Even though Bush was considered a lock to win after his phenomenal two games to finish the regular season, he still was stunned a bit by how much he pulled away, as if he were on the field against a helpless linebacker who falters while giving chase.

Only former USC tailback O.J. Simpson received more first-place votes (855) and more points (2,853) than Bush, but there were 1,200 possible voters in 1968 compared to only 923 this season. Bush, who finished first in every region, received a record 84.9 percent of the first-place votes cast.

He briefly was moved to tears during his acceptance speech when he spoke about his family, including the stepfather he considers his true father: LaMar Griffin.

"What can I say? You took me in at the age of 2," said Bush, who stopped briefly to regain his composure. "It takes a man to do something like that."

Bush also praised Leinart for his decision to return to USC for his senior season, a surprising move few expect Bush will duplicate since he likely would be the first pick if he enters April’s NFL draft.

"Your decision to come back this year has changed my life so much," Bush said to Leinart during his speech. "Thank you."

Bush’s next move after the Rose Bowl is uncertain, but this much is guaranteed: His number – 5 – will be retired when he is done, along with those of the first six USC Heisman Trophy winners.

"There’s a lot of Heismans here at USC," Carroll said.

Distributed by Knight Ridder/Tribune Information Services.
Article posted on 12/19/2005
This article has been viewed 2543 times.

Football
NFC preview: How the Eagles stack up against the rest of the conference
788 views

Football
Austin Proehl, hopes to join his father with a Super Bowl ring, helps out by playing role of Edelman
1,663 views

Football
Rested Rams and recovered Aqib Talib know what it takes down the stretch
2,284 views