Looking For Love Online: Which Site Is Best For You? 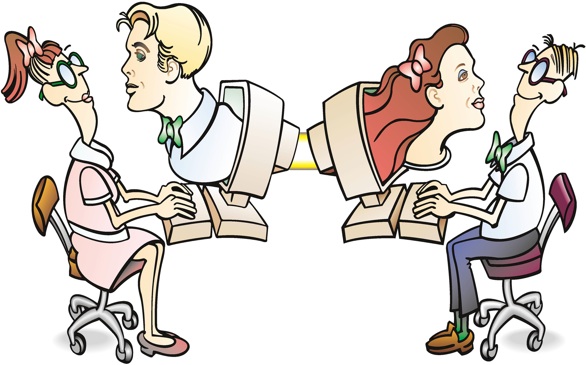 A chance romantic encounter during a night at the bar has apparently become too limiting, and single people, both young and old, are turning to online dating to find their soul mate.

Once in the workforce, people often find themselves surrounded by the same people every day. A divorced person can feel isolated and out of practice. Even college students surrounded by their peers can find it difficult to meet some one.

But just as bars cater to different clientele, online dating sites target different groups based on age, religion, sexual orientation, and economic and social status. How to pick which one is right for you?

Paige, 23, a college student who didn't want her last name or school used, says that she has had a hard time meeting people because she's a commuter, so she started using okcupid.com.

"So far I have only gone on two dates, so there has been some success," says Paige. "I haven't found a relationship yet. It was very isolating in college classes since people only concentrate on their work."

The dating scene has changed drastically in the last 10 years, with more people turning to the power of the Internet to play matchmaker. Between 2005 and 2012, about one third of married couples began their relationship through an online connection, according to a study from the University of Chicago. The study expects for online dating to pick up more in the next five years.

"The dating scene is different now," says Marissa McClay, 29, of Naugatuck, a user of Plenty of Fish, or POF.com. "People are afraid to approach each other. Who wants to marry the guy that you met at the bar?"

Miranda Corrigan, 18, of East Hartford, turned to okcupid.com and meetme.com to try her luck.

"I mainly use online dating because school and work don't have a lot of opportunity to meet new people," says Corrigan. "I like the online dating aspect because you can weed out the creeps easier by simply stop talking to them."

"There aren't many places to meet people in Connecticut aside from clubs or church," says Lisa Fraser, 50, of Milford, who met her boyfriend of over a year through blackpeoplemeet.com.

People who join dating sites are typically looking for a serious relationship, and many of the popular sites attract all age groups. Sites vary in who they appeal to and can range from free to as much as $1,000.

Despite screening precautions taken by the sites and users, online daters need to be cautious. Most sites give warnings to be wary of fraud, especially of potential users attempting to steal identities. Certain sites give safety tips to follow when meeting with face-to-face. Online daters should share photos with caution, protect their private information, always be on guard during meet-ups, and should drive themselves when meeting another user.

Kassi McSherry, 22, of Naugatuck, says meeting someone in person is the hardest part of online dating.

"I usually set up a fail date, where I cancel the day before or earlier," she says. "If they handle it badly (such as being exceptionally angry or whining), I stop talking to them, but if they're mature I set another date up. Planning can be a fun process, but also nerve wracking."

Fraser says she spends about two months chatting online before she exchange phone numbers. Then it's talking for about a month before a meeting happens.

McClay has met with dates after about a week of chatting online and says she will text her date for a few days before meeting up with them at a Dunkin Donuts. "It's a quick thing to do and you don't have to waste time," says McClay.

McSherry met her boyfriend on miumeet.com.

"I'd usually meet in a mall or park, somewhere public where it's safe but where you can carry on a conversation," says McSherry. "I only met once at a restaurant, but I made sure it was during a busy part of the day. And that's where I met my boyfriend who I'm dating now. Online dating can be fun and worth it if you give it enough time and stay safe."

The next trend appears to be mobile dating. A lot of dating websites have apps that allow users to connect to profiles anywhere. Rather than using the website to find dates, users can locate other users nearby with their smartphones. The apps can pinpoint the location of another user if the interest is mutual for an instant meeting, allowing users to come face-to-face a lot faster.

Not everyone who joins a dating website is looking for romance. Some simply want a friendship or companionship. Sites such as okcupid.com, ourtime.com, and POF.com offer the option of choosing that you are seeking specifically friendship only.

Online dating users should be weary of what they say and put online. Cyber bullying or harassment is a misdemeanor in Connecticut. Users leave a digital footprint, and certain material can haunt them later.

Only create a profile if you plan to be active on the site. Certain users create accounts as an ego boost to see how many suitors they can get. People hoping to find a relationship then are forced to comb through inactive or fake accounts.

Various dating sites appeal to certain age groups. Ourtime.com is geared for people who are 50 and over while sites like zoosk.com or okcupid.com attracts a college-age group. Listed below are popular dating sites with their costs, age groups, and their method of matching users. According to a 2011 online dating study at Drexel University, researchers found eHarmony.com had an 84 percent of users report success stories while match.com had only 46.7 percent, and okcupid.com 23 percent. Success rates were not available for all sites.

This free site geared toward a college crowd is open to all sexual orientations for users seeking relationships, friends, or companionship. Users take an extensive quiz, and a mathematical formula narrows down matches based on three values: your answer, how you' like someone to answer, and how important is the question. It has a phone app that allows you to see the immediate location of other singles (that share a mutual interest) in your area.

This site starts with monthly subscription of $29.99. It is geared toward a 25-and-over-crowd and is open to all sexual orientations for users seeking a serious relationship. There is no formula or method used to create matches: The website lists who is available in your area and users can pair themselves. There is an app that allows access to your profile with the same functions as the website.

The site starts with a monthly subscription of $59.99. Targets a 25-and-over age group of all sexual orientations, but mainly geared toward heterosexuals. The site looks extensively at three components: core traits such as intellect and curiosity, values and beliefs, and relationship skills. The site does matching based on scientific studies on compatibility. Their app allows for access to user's profile and has same functions as website.

This free website is geared to all ages 18 and plus and is open to all sexual orientations that are seeking relationships, friends, or companionship. The site uses a compatibility questionnaire for matches to create matches. The app allows access to profile and has same functions as website. It also allows to message with other members nearby.

This free website is geared for ages 18 to 30 and connects to facebook.com. It is open to all sexual orientations that are seeking relationships, friends, or companionship. There is no formula or method to create matches: The website lists who is available in your area and users pairs themselves. The app allows for access to user's profile and has same functions as website.

This free website is for ages 18 and up and open to all sexual orientations that are seeking a serious relationship. There is no formula to create matches: The website lists who is in your area and users pair themselves. There is no app.

A Jewish dating website that starts with a monthly subscription of $36.99. There is no homosexual option. Mainly for the Jewish community 18 and over. It is recommended to try a trial first to see if there is a Jewish community within your area. The app has the same functions as the website.

This site starts with a monthly subscription of $19.99. Mainly for users ages 50 of all sexual orientations that are seeking relationship, friends or companionship. No formula is used to create matches: The website lists who is available in your area and users pair themselves. There is no app.

This free website is geared for all ages 18 and older, but has no option for gay people. The free membership can be limited, but a basic membership is $13.99 a month. Specifically for Christian users seeking a relationship, friends, or companionship. No formula is used to create matches: The website lists who is available in your area and users pair themselves. The app allows for access to users' profiles and has same functions as the website.

Different because users have to schedule an in-person interview with a matchmaker. Prices range from $84 to $1,000 depending on the match-making package chosen. Geared toward ages 30 and over. After the interview the specialist sets up a lunch date with the match she has chosen for you. The specialist makes all the of the arrangements and the user just has to show up. Matches are selected based on answers given in interviews and the feedback given after dates. The program guarantees dates for all users with quality matches. However, not recommended for people living in rural areas.

A monthly subscription to the site $49.99. The site is geared toward ages 25 and over and is open to all sexual orientations seeking serious relationships. Users takes a personality test used to determine possible matches. There is no app.

Special Features
6 ways to cut back at work and be instantly happier
4,341 views

Special Features
Ticket costs for theme parks climb more than for other forms of entertainment
2,419 views

Special Features
Ringling Bros. and Barnum & Bailey to Debut Out Of This World Circus Experience
6,204 views