Llama Trekking in Taos: What a Trip! 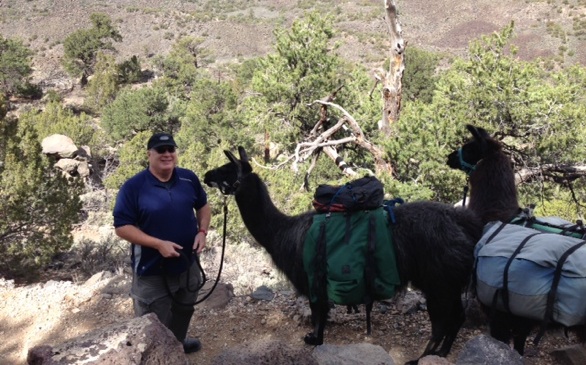 Taos, N.M. is famous for a lot of things. Rich in old west and Native American history, the smallish city is also renowned for its art and culinary scenes and, being located at the base of the towering Sangre de Cristo mountain range, for being an outdoorsman’s paradise. One of the most fun ways to explore the wilderness around Taos is with a very fuzzy friend, and I don’t mean your bearded buddy. I’m talking about hitting the trail with a llama in tow. In fact, in Taos you can even take a llama to lunch.

Wild Earth Llama Adventures offers various llama trekking excursions in the Taos area, but one of the most popular is the “Take a Llama to Lunch” adventure. At the Big Arsenic Trailhead adjacent to the Rio Grande Gorge, hikers will be paired up with a llama after having a chance to feed and pet each of them. Llamas also have their own unique personalities so, although all of them are mellow, the guide will do his best to match each hiker with the llama that best suits them.

The mile-long hike down to the Rio Grande River is steep and rocky in places, but the trail is well maintained and the llama train stops often, allowing hikers to sit for a moment or take photos of the stunning vista. Along the way, hikers will get to know their llamas and vice versa. When you get a gentle nuzzling, you’ll know you’ve made a friend. As you amble along, the tour guide points out edible plants and wildlife lairs while also explaining some of the area’s history and folklore.

The llamas pack in plenty of extra drinking water, and they’ll carry your excess gear so you don’t have to lug that extra jacket, raincoat or camera bag yourself. And most importantly, the llamas bring lunch. After spending half an hour or so exploring the riverbank, your tour guide will have offloaded the llamas and have a seriously tasty lunch ready, featuring salad and an array of healthy toppings, prime cut turkey, cheese, fresh bread made in nearby Santa Fe, Blue Sky natural soda and a selection of premium cookies. The llamas have lunch too; they’re munching on vegetation.

After lunch, hikers can go for a walk along the river, without their llamas, to see ancient petroglyphs. Then, with all concerned rested and well fed, the hike back to the trailhead begins. There’s about an 800-foot change in elevation over the course of the mile, so it takes a bit more effort and a little more time going up than it did coming down. But there’s no rush, especially since soon you will have to hug your llama goodbye. Once back at the top, hikers get to once again give their buddy a couple llama treats and last minute photos. The whole adventure lasts about four hours, and the hike is suitable for anyone who is in reasonably good shape. For more information, visit www.llamaadventures.com.

Because the llama adventure takes place about 45 minutes outside of Taos, plan on it taking up the entire morning and the early part of your afternoon. That’ll still give you half a day to enjoy some of the other things to do around town such as touring the Taos Pueblo (the more than 1,000-year-old Native American settlement that the city is named for) or visiting the Earthship Biotecture to see trippy futuristic-looking “sustainable green” homes.

In town, visit Kit Carson Park to see the gravesite of the famous scout or cruise the art galleries of downtown Taos to view every kind of art, including giant multidimensional fantasy paintings by Kimberly Webber at Old World Fine Art Gallery.

The San Francisco de Asis Mission Church (immortalized in a painting by Georgia O’Keeffe) is here too, and the Historic Taos Inn right in the heart of town is a good place to stay if you fancy an encounter with a ghost. The Historic Taos Inn is also a favorite “haunt” of local musicians; the hotel’s front room features live music every night and Mondays are open-mic nights if you happen to be traveling with your guitar. You’ll probably want to write a song about llamas just for the occasion.