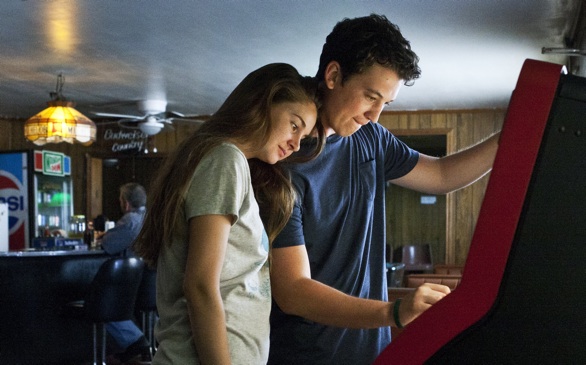 The only thing Sutter Keely takes seriously in life is making sure he doesn’t take it too seriously. With a Big Gulp full of booze in one hand and a figurative conductor’s wand in the other, this senior rules his high school. He’s got a hard-partying, pretty girlfriend, a posh job at a designer men’s store and a mythological airplane pilot for a father. Living in the now is the only reality for him.

The Spectacular Now, in crude but honest terms, celebrates the campus douchebag. You know the type: the comical slacker who lights a fire under pals’ rear-ends to be more spontaneous and practically force-feeds his homework to the dog. He’s the willing family pariah, gleefully embarrassing a well-to-do sister (Mary Elizabeth Winstead) who’s married to a foppish lawyer.

Perhaps screenwriters Scott Neustadter and Michael H. Weber (who paired on (500) Days of Summer) aimed to treat Sutter like a cinematic underdog. The beckoning of college doesn’t necessarily appeal to everyone, but to follow this underachiever seems an exercise in futility.

The action picks up when the swarthy protagonist (played smoothly by Miles Teller) wakes from a drunken stupor on a random lawn. Peering down at him is decidedly unspectacular Aimee (a charming Shailene Woodley), a nonjudgmental, sweet – if dowdy – girl from school. They form an unlikely symbiotic relationship in which Sutter proclaims to have “saved” her from solitary nerdiness (she’s in the French club and collects manga) while he plots to get back with his vibrant ex, Cassidy (Brie Larson).

The film’s premise (and original novel by Tim Tharp) forces one to ask: who’s really doing the saving here? As Sutter does Aimee a “favor” by giving her the boyfriend experience and coaxing her into a drinking habit, she prods him into meeting up with his estranged dad after years of separation. (Kyle Chandler does a fine, if cliché, turn as Sutter’s sloppy pops.) The duo mutually encourage each other to also stick it to their mothers: Jennifer Jason Leigh is the Keely family’s frazzled matriarch, and Aimee’s mom is portrayed only as an onerous voice that barks out bad decisions, an irresponsible child herself.

Don’t expect any uplifting, life-affirming moments from The Spectacular Now. If anything, it’s a tragedy disguised as a coming-of-age story. Sutter reveals himself to be one of the most pathetic “heroes” of teen lit, a lecherous devil who embodies the idea of “misery loves company.” In thinking he’s rescuing his friends from worry, he’s really just bracing himself as the walls of loneliness close in on him. But the film doesn’t go so far as to proclaim itself a cautionary tale against alcoholism— it’s more like a hint that after high school, social status doesn’t matter.

Unfortunately, The Spectacular Now doesn’t offer much to suggest that it matters in the scheme of youthful-growth movies. For as grandiose as Sutter imagines himself to be, the flick feels small, stilted. Maybe that was the writers and director James Ponsoldt’s intention, but the claustrophobia makes the film feel much longer than its scant 95-minute run.

The Spectacular Now is currently playing in theaters.