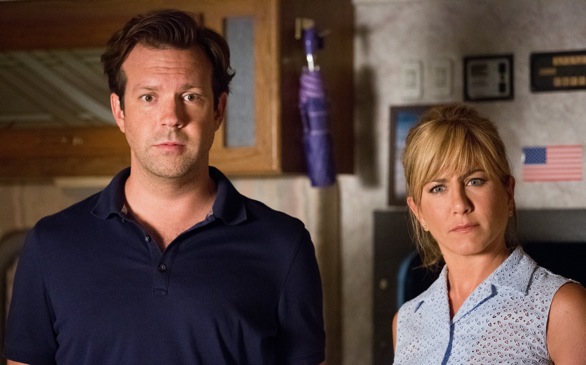 NEW YORK — When Jennifer Aniston heard last month that Jason Sudeikis was exiting "Saturday Night Live," she sent the comic actor a text. "So sad you're leaving — selfishly — but good for you. An enormous life awaits," she wrote.

Her advice in person was a little more portentous.

"Brace yourself for what the next year will feel like," the actress said to Sudeikis as she sipped coffee with him at a downtown hotel last week. Aniston had retired her own signature persona, "Friends" mainstay Rachel Green, after more than a decade, and she knew there was a tendency to underestimate the feelings involved.

"It's an empty, gaping wound that creeps up and hits you out of nowhere," she continued. "You suddenly don't have the structure and the family."

"But at least when you stopped, you guys shut down the show. I'll be down the street Tuesday night, which is the hardest night at 'SNL' — writing night — phantom-typing on my desk," he said with a hint of moroseness.

New beginnings are on the minds of both actors as they prepare for the release on Wednesday of their comedy We're the Millers. Sudeikis, 37, and Aniston, 44, each play lost souls — he a down-on-his-luck pot dealer and she a struggling stripper — who enlist a pair of teenagers (Emma Roberts and Will Poulter) to pose as a fake family so they can smuggle a stash of drugs from Mexico in a get-rich-quick scheme.

The R-rated film from director Rawson Marshall Thurber (Dodgeball) — made with the help of a quartet of credited writers and plenty of improvs from Sudeikis — takes the family road-trip comedy pioneered by movies such as Vacation and adds a subversive twist.

The film thrusts Sudeikis into a new light. As he prepares to leave the NBC show on which he's toiled as an actor and writer for the last 10 years, he is tackling a lead role in a Hollywood movie for the first time, toggling between a chirpy fake suburban dad and rough-around-the-edges arrested adolescent.

Aniston is experiencing her own shift. After going against type with a supporting part as a sexually aggressive dentist in 2011's Horrible Bosses, she pushes further here with a lead role involving, among other things, an elaborate exotic dance in lingerie to get her fake family out of trouble.

"I'm always fighting the 'Is this like Rachel?' hanging over my head," Aniston said, citing many filmmakers' unwillingness to allow her to go beyond girl-next-door roles. "I'm doing something like this movie to make things a little more interesting to myself but also to surprise people with elements of what I can do." (She tries once more in September with a role in the harder-edged Elmore Leonard adaptation Life of Crime, which closes the Toronto International Film Festival.)

Sudeikis and Aniston offer contrasting comedic styles — he the Second City veteran and improv master, she the star of a long-running multicamera sitcom.

Though that might seem like a wobbly combination, the pair said it proved a good mix on Millers.

Sudeikis would draw often from his background to line up a series of quick-hit improvs. He helped come up with a raunchy joke in a scene involving a Pictionary game (it's unprintable here, but let's say a skateboard, male genitalia and a famed overseas military mission are involved) and sneakily subbed in the "Friends" theme song during a TLC musical cue to get a rise from Aniston. (The scene winds up in the end-credits.)

He also had to roll with it while Nick Offerman, as a square road-tripper encountered along the way, spontaneously inserted his finger in Sudeikis' ear during an awkward, sexually charged scene. Not missing a beat, Sudeikis began massaging Offerman's privates.

Aniston's comedy, meanwhile, is far more low-key — to some critics, even generic.

But those who worked on this movie said she brings her own skill to balance Sudeikis' comedic rat-a-tat.

"There's something incredibly difficult about taking a written line and making it seem like the most natural thing in the world," Thurber said. "I don't know if Jen gets enough credit for that."

On-set skills were perhaps especially necessary on this movie. The We're the Millers script was one of those Hollywood projects that sat on the shelf for nearly a decade with a revolving door of actors and directors unable to get it off the ground at Warner Bros.' New Line. Enter Sudeikis and Aniston, who had worked together on Bosses and the lightly seen action comedy The Bounty Hunter, and whose big-screen stock was rising.

Still, the many iterations took their toll. Though the movie has a number of laugh-out-loud set pieces, Aniston acknowledges they were "plugging up holes" right through production — not least because it isn't easy to capture the right tone in a movie about a pot dealer pretending to be a suburban husband so he can smuggle drugs.

"There was a lot of up-to-the-last-minute stuff, and then the clock ran out and we had to start shooting," Aniston said.

"So we did it on the set," Sudeikis added. On the first day of production, a surprise sandstorm blew in and caused a shutdown.

Sudeikis, deadpan and a little shy in person, says he's found the process of promoting the movie while his "SNL" news has broken tricky, calling the experience, with a mixture of appreciation and caution, "like attending my own funeral."

Still, despite the challenges — plenty of "SNL" veterans don't go on to flourishing film careers, after all — he hopes this role marks the beginning of a new chapter. It's a hope endorsed by his collaborators.

"Jason has this ability on-screen to be really charming but just a little bit of a jerk, like Bill Murray at the height of his power," Thurber said.

That good-guy veneer allows him to play a corrupting influence — a man who, as he has in recent film roles, goads people to kill their boss (Horrible Bosses), cheat on their wife (Hall Pass) and commit major drug felonies.

It's the kind of edgy part he likes. But Sudeikis, recently engaged to actress Olivia Wilde, also may not mind something a little less odious next time out.

"It would be nice to play someone who's using his charm for a little more good in the world, maybe a pet detective, like Ace Ventura," he said. "Or maybe Fletch. Investigative journalist. Who can argue with that?"