Mack Brown: Finally Gets a Shot at Championship

By Kevin B. Blackistone 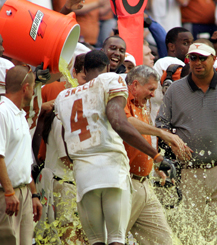 Untitled Document The dot-com thing boomed and burst. A second president is in the White House and is in his second term. Britney Spears married, split up and married again.

And after eight years, Mack Brown on Saturday won an invite for the Texas Longhorns to participate in the national championship game.

Suffice it to say, however, that eight years in this day and age for a humongous state school with all the athletic might and financial resources of Texas is a long time, perhaps a long, long time.

It certainly was a lot longer than plenty of Orangebloods expected when DeLoss Dodds plucked UT’s 28th football coach from a basketball school, North Carolina. And they certainly couldn’t forget that their despised rival north of the Red River, Oklahoma, hired a coach in Bob Stoops who pulled off this magic in about the time it takes a New York street light to turn green and the cabbie behind you to start honking.

So what Brown finally accomplished in Reliant Stadium on the strength of a massive blowout of overmatched Colorado, 70-3, was, in a lot of ways, a penultimate act in an exercise of perseverance. For no coach in Texas history ever was allowed as long of a ride as Brown has had without even sniffing a national title.

"A lot of people put a lot of work into this one," Brown said of this 2005 campaign.

He wasn’t just alluding to his fabulous Heisman-candidate quarterback, Vince Young, who threw three touchdown passes and ran for one in what wound up much less than a full day’s work against Colorado. He wasn’t merely touching upon his new coordinator, Gene Chizik, who has transformed the Horns’ defense into one that can provide the prerequisite backbone for a national championship.

Brown also was referring to people like Dodds and the big-money boosters like Tom Hicks. They didn’t get antsy after the Chris Simms reign failed and Brown continued to stand by his oft-criticized offensive coordinator, Greg Davis.

For Brown, as a result, time was never of the essence. He had patient people on his side.

He even had evidence that his teams were getting better almost every year. The best before this season, for example, was last season’s.

"When you get to the end and don’t finish it like you want to, it’s frustrating,’’ Brown said of close misses in recent seasons. "But as a coach, you know how close you are.

"We’re proud that we finally got over the BCS hump last year. I thought that was so key (to success this season)."

Most of these Longhorns can say they’ve been to the Rose Bowl before and even won it, no matter that it wasn’t for the most-coveted title in the game.

Ultimately, that was why Brown never should’ve been in danger of losing anything at Texas other than some of his outstanding players to the NFL before he squeezed all of their college eligibility from them. Eleven wins in three of the last four seasons are hard to mount an argument against even if none of them was for the conference title, let alone the national title.

On top of that, there are all the good guys Brown seems to have helped refine at Texas. Good things like this season should come to someone as likeable as Brown.

"This will be a lot of fun for these guys," Brown said, a little grayer than when he arrived in Austin. "I want them to go out there and enjoy it. I’m trying to really enjoy this and take this in more than I have in the past."

All this time gone by shouldn’t dull the sweet taste of success Brown got at Reliant, which was symbolized at the very end in a shower of sweet lime-colored Gatorade from a bucket dumped by several of his charges. Didn’t someone say that good things come to those who wait?

"It’s for the national championship," Brown exhaled about the next game. "Most people don’t even get a chance to play for one, let alone win one. This group has been fighting the pressure of going back to the Rose Bowl ever since the Oklahoma game."

Brown’s Longhorns now have that ultimate opportunity. And no matter the wait, everyone who sports burnt orange should feel the time it’s taken is worth it.

Distributed by Knight Ridder/Tribune Information Services.
Article posted on 12/19/2005
This article has been viewed 3120 times.

Football
NFC preview: How the Eagles stack up against the rest of the conference
788 views

Football
Austin Proehl, hopes to join his father with a Super Bowl ring, helps out by playing role of Edelman
1,663 views

Football
Rested Rams and recovered Aqib Talib know what it takes down the stretch
2,284 views