Identity Theft of College Students on the Rise 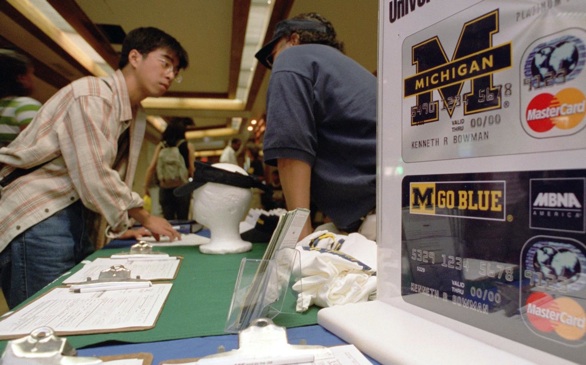 Avoid applying for a credit card at a campus table or booth.
(Credit: PATRICIA BECK/MCT)

As students begin packing their bags and moving back to college campuses, one thing often gets forgotten in the craziness of back to school shopping, new student forms and talks about drug and alcohol use — identity theft.

While identity theft is nothing new in our economic world, college students are becoming more prone to having their identities stolen.

"There is value in stealing a college student's identity — it's not about the money, but about the clean record," said Ken Chaplin, senior vice president of marketing for ProtectMyID.

And once a student's identity is stolen, a lot can happen, Chaplin said. Anything from loss of financial assets, damaged reputation, losing a job, disputed social standing and stolen health insurance all can occur as a result of stolen identity.

One woman, Erika Bennett, ended up with a tarnished credit score after her identity was stolen before she entered college. She found out when she tried to buy her first cell phone, only to be asked for a huge deposit. When she returned to her dorm, Bennett looked up her credit score and found it was all over the place.

"I think as best you can, guard your Social Security number and personal information," Bennett said. "Everything is tied to your credit profile."

While it would be easy to blame technology for this rise in student identity theft, it seems that smartphones and laptops really are not to blame.

"With phones and laptops, people are much more exposed than in previous years, but a lot of the identity theft is done in old-school ways," Chaplin said.

He added, "identity theft is a crime of opportunity — if a thief's opportunity is there, they will certainly take it."

Unlocked doors, open laptops and unattended wallets can all lead to these crimes of opportunity. Add into the mix a scatterbrained new student and identity theft is all too easy for a criminal to commit.

"Students are entering the world, so having that financial conversation with parents is key. They don't just have to discuss identity theft, but also careful decision making when it comes to credit cards and money," Chaplin said.

Parents should remember to mention a few key things to their student about identity theft when they have this talk.

—LOCK UP!
Always keep the dorm room or apartment doors locked. Lock drawers that contain information that could be used by a thief. Also, passwords and passcodes on phones and computers that may contain important information help protect students against theft.

—WATCH WHERE YOU SHOP
Online offers and shopping are great places for criminals to steal someone's identity. Only do business on websites that have the security lock symbol, which means the site has taken measures to protect customers' information.