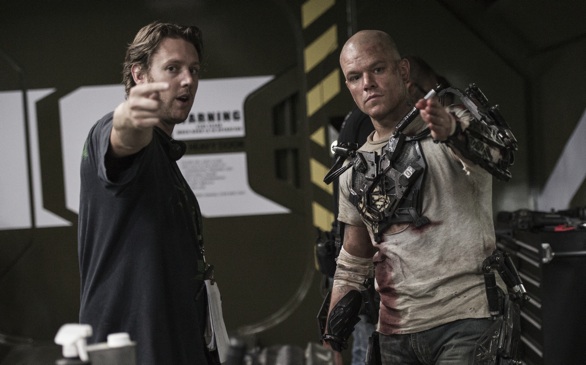 In the future-set utopia that Neill Blomkamp dreamed up for Elysium, the lawns are manicured and lush, the women are slim and beautiful, and everyone is very, very rich.

If that sounds a lot like certain neighborhoods in Los Angeles, it’s no accident — the South Africa-born writer-director found inspiration for his fictional enclave in Bel-Air and Beverly Hills as well as wealthy sections of his home city, Johannesburg.

“A lot of parts of L.A. are interchangeable with suburbs in Joburg,” Blomkamp said. “Very big, ostentatious houses with palm trees and lawns. Lawns are very important. Never underestimate lawns.”

Blomkamp’s action movie, which opens Aug. 9, is about haves and have-nots in 2154, with the haves living on Elysium, a luxury habitat that orbits a ruined, overpopulated planet. Down on Earth, factory worker Max (a shaven, tattooed Matt Damon) contracts cancer in an industrial accident and is desperate for the advanced medicine available on Elysium. Up in the orbiting idyll, a cunning politician (Jodie Foster, with a French accent and prim suits) is working mightily to keep out people like Max.

Elysium is Blomkamp’s second feature film and his second depiction of a world with gross inequalities via the cinema-friendly tools of science fiction. His first, the 2009 apartheid parable District 9, became both a sleeper box-office hit and — improbably for a movie featuring prawn-shaped aliens — a best picture nominee.

Blomkamp, 33, may be singularly equipped to make this kind of politically provocative popcorn movie, thanks to his childhood spent in the tinderbox of Johannesburg during the dismantling of apartheid, his unusual aptitude in the field of visual effects and his analytical temperament prone to ruminating on doomsday scenarios.

He also stands out in Hollywood as especially protective of his creative autonomy and skeptical of the industry’s habits — a stance acquired after a first, high-profile project fell apart.

“What I do is spend too much time thinking,” Blomkamp said in the Elysium-like environment of a Santa Monica beach hotel. “Most of the time I just walk around annoyed. Would I describe myself as relatively happy, I suppose, but society gets to me. And the people that have mastered life seem to not care and then they die and then the grenade goes off.”

It would have been easy to mistake Blomkamp for a surfer, with his spiky hair and habit of dropping “dude” into his speech. Those who work with him say there’s much more to Blomkamp than meets the eye.

“Neill has incredibly powerful and unique artistic DNA,” said Modi Wiczyk, the co-chief executive of Media Rights Capital, the independent studio that helped finance Elysium’s $115 million budget, together with Sony Pictures Entertainment. “He grew up in a racist, fascistic empire, watched it be overthrown, collapse into chaos, all while walking to school every day. Imagine the impression that leaves on you.”

That his movies, with their spaceships and futuristic weapons, are viewed as unusually political by Hollywood standards surprises Blomkamp.

“If there isn’t a deep core reason for a film existing, what is the point?” he said. “For me to be known as a filmmaker that makes films that have a point, I’m stoked. But to be pigeonholed into political films, I would put a gun in my mouth if that’s how my career ended up.”

Blomkamp’s fast-rising career started in a different direction. When the violence in Johannesburg became too much for his mother to take in the 1990s, she moved the family to Vancouver, Canada, where Neill ultimately enrolled in a computer-animation program at Vancouver Film School.

On the strength of work he did in music videos, short films and commercials for Nike and Gatorade, Blomkamp was hired by Lord of the Rings director Peter Jackson and Jackson’s partner, Fran Walsh, to direct a plum project — the high-profile feature adaptation of Microsoft’s popular video-game series Halo. Blomkamp began crafting a world, designing weapons and costumes, but in 2006 the film collapsed as Microsoft and the two film studios financing it couldn’t agree on terms.

Blomkamp considers the death of his Halo movie one of the great strokes of luck in his career. When it fell apart, a sympathetic Jackson and Walsh produced and helped Blomkamp find financing for a $30-million movie that no studio would have greenlighted — the South Africa-set District 9. As his lead, Blomkamp cast someone else no one had ever heard of: his childhood friend South African actor Sharlto Copley, who also appears in Elysium as a frightening mercenary.

“The luck is the fact that Peter and Fran let me make (District 9) out of the ruins that were Halo,” Blomkamp said. “What happened out of that was learning to trust my ideas. If Halo had come out and succeeded or failed, I wouldn’t have learned that.”

When District 9 became a surprise commercial and critical success — and a model of thrift for Blomkamp’s efficient use of visual effects — the director was once again sent offers to helm big-budget franchise films, he said. With the memory of the Halo experience fresh in his mind, he turned them down.

“It’s getting to the point now where WME just doesn’t send me stuff anymore,” he said, referring to his agency, William Morris Endeavor. “It’s not because I think I’m better than any of that stuff. There are many franchises out there I would love to participate in. The problem is when you agree to do that, you take a lot of the control that you have over your own creative destiny away from yourself.”

After casting unknowns worked so well for him on District 9, Blomkamp was hesitant to work with movie stars on his sophomore film, fearing a powerful actor would hijack the production. At an early meeting with Damon at a diner in New York, the reluctance was palpable.

“My agent warned me he’s leery of what he calls Hollywood people,” Damon said. “At first he was kind of giving me the one-eye, he was on guard. What made him leery was inviting a 400-pound gorilla into his laboratory.”

Finding in Damon a creative compatriot instead of a diva, Blomkamp relaxed his opinion of movie stars, ultimately casting Foster as well.

Blomkamp, who wrote the script for Elysium, shared with Damon a graphic novel he had made depicting the world, an experience that reminded the actor of another meeting he’d once had — talking to James Cameron before he directed Avatar.

“Cameron talked about the world in unbelievable detail as if it existed,” Damon said. “It was that same thing talking to Neill. He made a whole separate book on weapons systems, for something that would occupy the background of one shot for one moment.”

The graphic novel was part of the same pitch that won over executives at Sony. “Our impression was that he was a brilliantly talented young visual filmmaker who had a real voice,” said Doug Belgrad, president of Columbia Pictures, a division of Sony. “He seemed to stay away from the fishbowl of Los Angeles and to be interested in making original, unique films.”

Indeed, Blomkamp still lives in Vancouver with his wife, screenwriter Terri Tatchell, with whom he wrote District 9, and their 14-year-old daughter.

To make Elysium was in many ways to live it — a set in Vancouver provided the space habitat, a massive landfill in Mexico City was Earth. At one point a union representing some of the crew objected to the toxicity of the working conditions in the dump, and the production had to scrape off the top layer of silt and replace it with fake prop garbage. Before going to lunch, cast and crew had to pass through a clean zone.

“You have this relatively wealthy First World crew coming into the abject slums of Mexico City with very high technology in amongst complete destitute poverty-stricken communities,” Blomkamp said. “That is Elysium. We came from the space station of California and it ejected us right there.”

Scenes on Earth are shot using hand-held cameras, lending the place a feeling of chaos and foreboding. On Elysium, the camera work is mostly smooth and comforting.

Blomkamp’s desire to control his creative fate was challenged when one scene featuring Damon’s character played poorly with early audiences. Ultimately he took two days to reshoot the scene. “The film that happens in theaters — the right calls were made,” he said. “That’s the director’s cut.”

Blomkamp has begun pre-production on his next film, a much lower-budget movie called Chappie, which he’ll start shooting in Johannesburg in September and which stars a South African band called Die Antwoord (The Answer). Chappie concerns the subject of sentience — “If you mixed RoboCop with E.T. and it was ... funny, that’s what it is,” he said.

Elysium footage that screened at Comic-Con last year was a hit with audiences, but as an original idea not tied to a comic book or a known character the movie will face challenges in the wider marketplace.

The young director hopes his movie stays with viewers after the credits roll.

“If you want the popcorn experience, you’re meant to be stoked,” Blomkamp said. “If you’re in the elevator going down to the parking and ... the end bothers you, you watched it correctly.”