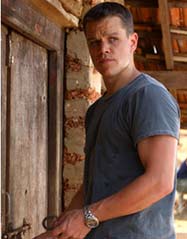 He has had unexpected successes and major flops, but Matt Damon is bouncing back again.

Unlike his buddy Ben Affleck, Damon has managed to follow up their screenwriting Oscar for Good Will Hunting without dressing up in red tights (Daredevil), blowing up asteroids (Armageddon) or making horrible movies with his fiancée.

But Damon won’t criticize his friend’s choices, nor is he trying to be the anti-Ben.

"There’s not enough reaction time for me to lay back and watch Ben’s mistakes and learn from them," says Damon, 33.

"After Good Will Hunting I did Saving Private Ryan (1998) and he did Armageddon (1998). Either of us could have been offered the other role, but the (perception) was, once Good Will Hunting came out, that I was the genius and Ben was the dolt.

"That he went on to do the big glitzy movie and I was in the big classy movie — that was more luck than anything.

"But I think now, especially with Gigli (2003) and Jersey Girl (2004) not doing that well, and because he just got unlucky and ended up in the crosshairs of those tabloid magazines, he got screwed."

Damon is willing to take some of the heat for the sad state of the Ben and Matt Show. Take The Legend of Bagger Vance (2000).

"I was the lead in a film directed by Robert Redford based on this really popular book that I read and liked," he says. "Everything was lined up right but ultimately it didn’t work.

"I just didn’t get it, and it wasn’t for lack of trying. I really did try. But I think it would have been better if Redford had played that role himself because I think he had the gravitas for that part — it would have been a different movie, of course, but it might have been much better."

The Bourne Supremacy, currently in theaters, is the second film starring Damon as novelist Robert Ludlum’s Jason Bourne, the assassin who suffered amnesia at the beginning of the first picture, The Bourne Identity (2002).

The earlier picture did far beyond anyone’s expectations — grossing more than $121 million in the U.S. and doing well on DVD and tape.

"It had a big word-of-mouth because, for one thing, people liked it, and for another, it wasn’t jammed down their throats," Damon says. "It didn’t have that bombastic, pretentious pitch behind it, demanding that people had to run to the theater on the first weekend.

"And it did well on video because it’s evidently something that people like to watch again."

It might also have something to do with Damon’s appeal, which, like the Bourne pictures, seems to grow over time.

"I can tell the difference between a personality and an actor, and Matt is definitely an actor," says Brian Cox, who plays the Bourne villain for the second time. "What’s most interesting is that he’s in a very embryonic stage. We’re watching his career unfold over time."

Joan Allen, who joins the series as the CIA figure in charge of finding Bourne, recalls Damon’s attention to detail.

"There was a scene where Matt was in a hospital bed, hooked up to monitors, and he turned to the crew and told them that they had the vital signs on the monitor all wrong for Jason Bourne, who was in fantastic shape," she says. "He was that aware of his character’s conditioning."

Damon is also aware that his movie opens during presidential campaign season. He’s a very public supporter of his home-state senator John Kerry.

"The Republicans are extremely good at negatively characterizing the influence of Hollywood on politics, so it’s almost like you can do more harm than good by throwing support behind someone," he says.

But he’s not worried.

"It’s a good time to be wealthy in America. And you’ve got to really be doing something that flies in the face of my beliefs to get me to turn my nose up at (the Bush administration’s) 5 percent tax break."