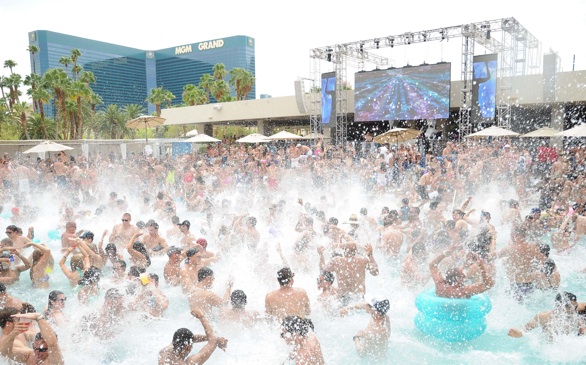 Sweaty clubs full of attractive people are about as synonymous with Vegas as Wayne Newton and slot machines. And with the never ending rise of EDM popularity acting as a backdrop, more and more world class venues are setting up shop all over the strip in hopes of attracting the world class talent that crowds are clamoring for.

MGM Grand’s own Hakkasan is one of the latest to throw their hat in the ring. Opening last April, the three-story, 60,000-capacity nightclub has attracted some of the biggest names in EDM. With residencies featuring names like Tiesto, deadmau5, Calvin Harris and Steve Aoki, it’s no wonder it’s shot to the front of the game with ease.

While the floor-to-ceiling LED lighting, fog machines and ear shattering sound are certainly the main attractions, what stood out most at Hakkasan was the sheer variety of alternative options for those feeling a little less “ravey.”

In particular, the Ling Ling Club and Lounge stood out for its relaxed atmosphere and laidback aesthetic. Tucked away just far enough to isolate itself from drunken stragglers, the lounge packed plenty of couches to stay comfortable but just enough music not to lull you to sleep.

But if you’re going to a Vegas club, you might as well go big, and the main club at Hakkasan is nothing short of stunning. With club tunes spun by deadmau5 on this particular night, the main room lit up in an explosion of lights, energy and fun. The post-midnight set time gave everyone in attendance plenty of time to get tipsy on (admittedly expected) overpriced cocktails, and the club remained open far longer than a similarly exciting L.A. equivalent.

After crashing for a few hours and waking up to 100-plus degree temperatures, what comes next? Nothing washes away that hangover quite like a Subway Footlong, three Modelos and some more shenanigans at one of the many pool parties in town.

Wet Republic at MGM Grand isn’t the newest in town but remains a staple in the crowded Vegas landscape. With a 2,000-plus capacity populating the saltwater pools and seemingly never ending electronic music, it’s almost impossible not to be entertained. The people watching alone is worth the price of admission, with a crowd impressively low in bros and high on pretty much everything else.

And did I mention everyone was smiling? Pools inherently make people happy, so it’s no massive surprise. But when you get 2,000 people in good spirits drinking beers under the sun, the energy is completely contagious. Of course, the massively booming sound system didn’t seem to hurt either.

What did hurt were cashiers arbitrarily creating prices up behind the bar, such as the odd $25.00 beer/bottled water combination that hit several thirsty pool goers. Regardless, sky-high prices are to be expected in this town, though some consistency would go a ways.

Everywhere you go in Vegas is a veritable party and these two exciting, hysterically fun venues are no exception. Both represent cutting edge Vegas in every possible way and come highly recommended to anyone seeking a good time in the desert. Come for the women, come for the music, come for the party and leave your troubles at the door.