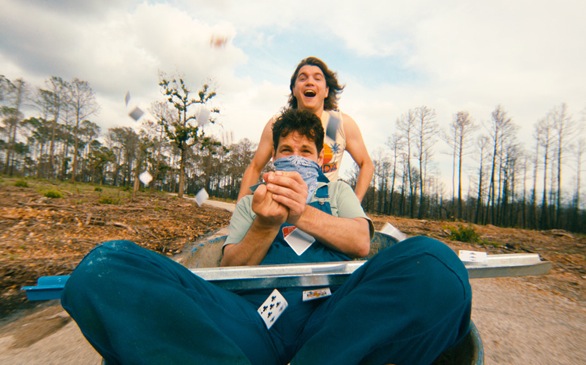 Humanity consists of a colossal collection of character: the passionate and the listless, the doers and the sloths, the “I’m going to make something of my life” go-getters and the contented convenient store workers. Yet, people are seldom so simple.

Director David Gordon Green was fascinated by this looseness of personality and decided to examine it in his meditative and character-driven Prince Avalanche. Green enlisted Paul Rudd and Emile Hirsch as the film’s unlikely duo, tediously painting the yellow dividing lines through an abandoned and recently burnt forest road. The utterly incompatible pair eventually merges the lines that divide them in a climactic frenzy fueled by alcohol.

Green, the acclaimed commercial and feature director known for indie cult-classics including 2000’s George Washington and studio comedy hits such as Pineapple Express, was compelled to make Prince Avalanche while watching and reminiscing on his 2012 Super Bowl Commercial for Chrysler. The commercial minimally features a soliloquy from a grumbling Clint Eastwood. Green relished that low-budget, stripped-down way of filming and decided to embark on a feature-length project in that spirit.

Green initiated his project after watching Either Way, an Icelandic original film that he set out to remake. “The Icelandic film was a great inspiration,” he said. “I greatly identify with these characters. I see them as different sides of myself.”

With a story and a cast, next up was to find a location. Fellow Austenite and friend, the drummer of the musical group Explosions in the Sky, informed Green of his evocative visit to the devastatingly burnt Bastrop State Park. With the charred remains just outside of Austin, Texas, Green visited and was poignantly inspired.

“There is a haunted quality,” remarked Green about the shooting location. “There’s always this melancholic umbrella over everything, even in the humorous parts. Then the characters are just in the foreground with their narrative.”

And despite the gorgeously dilapidated backdrop, Green masterfully entraps viewers’ attention on the two stars' mundane lives. Rudd and Hirsch, two lost souls, incessantly bicker about menial aspects to their rambling lives—like the Equal Time Agreement on the boom box. The dynamic is pitiful in the most enthralling way.

Hirsch plays Lance, the Parliament smoking, comic book reading, 18-year-old stuck in a late-20-year-old’s body. He works this trivial job just so he can attempt to hold onto his fleeting youth through weekend romps back at the bars in town. This is a completely contradictory role for those who remember Hirsch in Into the Wild.

“It was a chance to play a flipped perspective of the character I played in Into the Wild,” said Hirsch. “He loved nature and he was this very self-sufficient guy, then to get to play this very immature guy who hates being alone and just wants to go back to the city and get drunk and laid… I found that to be very interesting. There was a perverse pleasure in it.”

In spite of his clashing past role, Hirsch found playing the derelict Lance easy. “Most of my friends are very rarely employed,” he said. “I totally got that. That’s business as usual.”

As for Rudd, it would seem that the uptight role of Alvin would be a trying angle for the typically funny man as well. However, Green was confident in Rudd’s versatility after seeing his emotionally profound role on stage in the play “Long Day’s Journey into Night.”

Just like the lines the differing duo paints on the ground to direct traffic in diverse directions, they too are traveling down life’s road oppositely. Alvin is a composed romantic, who spends his time soul searching in nature, attempting to learn German, and writing love letters to his girlfriend, Lance’s sister. Lance, on the other hand, has no interest in the boring grimness of things like “settling down.”

Once serious issues inundate, the war begins. They don’t see eye to eye on the important things in life so they decide to fight. Like any two men, after the struggle, they grow closer and end up bonding. Of course, the moonshine helped loosen them up too.

“Lance LeGault was the character actor that played the old truck driver that came by and gave the boys moonshine,” said Green.

LeGault runs into the guys a few times and helps them see the bright side to life through his carefree attitude. He supplies the boys with drinks and encourages them to not take things so seriously.

“He put some real fear in Emile’s eye on some of these scenes, even though he was dragging an oxygen tank up a hill,” fawned Green about LeGault. Unfortunately, LeGault passed away shortly after filming.

“It’s a celebration of the liberation of alcohol,” said Green. “A lot of movies point to the frequent abuse and tragedy of it. Here, it’s like, there’s just these two guys that have a lot of problems dealing with each other. This is a way they can vacuum their inhibitions and get a little crazy.”

During the drunken revelry, the two take their equipment and recklessly scribble lines along the pavement. In doing so, they symbolically blur the lines that divide them as people. Alvin learns from Lance that he doesn’t have to be so serious all the time. Lance learns that maybe it is time to grow up.

In the majority of Green’s Prince Avalanche, Alvin and Lance just simply don’t get along. They are two guys going down different roads of life. But, in seeing each other’s differences, they realize that they’re specific paths aren’t the only one’s in existence. The two help each other realize that life is a curvy road filled with missed exits, potholes and the occasional U-turn.