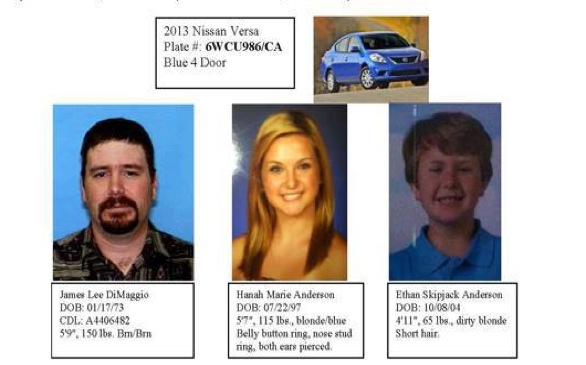 San Diego County Sheriff Bill Gore said Monday that James Lee DiMaggio held 16-year-old Hannah Anderson "under duress," meaning Anderson did not go with DiMaggio willingly. Gore also said that Anderson was unaware while she and DiMaggio were en route to Idaho that her mother and 8-year-old brother were dead.

“Our focus now is on trying to get Hannah all the resources, the help she needs to get through this extremely traumatic ordeal she’s been through,” said Gore.

DiMaggio was shot and killed by FBI agents on Saturday at a campsite near Morehead Lake, Idaho, a few miles from where horseback riders spotted him and Anderson. DiMaggio fired at least one shot before he was fatally wounded.

This ended a six-day manhunt for the alleged kidnapper and killer of Anderson's mother and brother, who were both found dead in DiMaggio's burned down home in rural San Diego County. Amber Alerts were extended to California, Nevada, Oregon, Washington and Idaho in search for the missing girl.