I Give It A Year 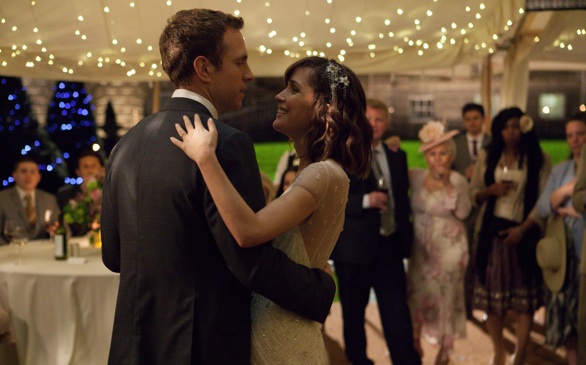 Despite their obvious differences, it was love at first sight for Nat (Rose Byrne), an ambitious executive type, and Josh (Rafe Spall), a struggling novelist. Things moved quickly for them, and their perfect wedding was fast approaching. At their wedding, there were awkward jokes from the best man, Danny (Stephen Merchant), an uncomfortable ex-girlfriend (Anna Faris) and bored married couples (Minnie Driver and Jason Flemyng) who knew all too well that the newlyweds' happiness wouldn't last a year.

Writer and first-time director Dan Mazer does a good job of laying down the groundwork right away and setting up what’s to come for the happy couple.

In the hopes of showing the reality of the first year of marriage, the film begins solidly but quickly gets in a rut just like Nat and Josh’s marriage. As they enter in couple's therapy, trying to figure out if they should give up or take another stab at it until their first anniversary, it’s crystal clear what they each want but are too cowardly to say.

When a handsome American client, Guy (Simon Baker), comes into the picture, Nat begins to wonder whether he’s a better match for her. On the other hand, Josh, who just can’t decide what to name his protagonist, continues to go back to ex-girlfriend Chloe when the going gets tough. What follows is a ridiculous set of attempts from Nat and Josh to bring Guy and Chloe together, despite their obvious attraction to them, and see who caves first.

With an all-star cast, the film has its share of comedy. However, it is most definitely British comedy and not for everyone.

The talented female cast adds so much more to the film: Byrne shines as always, Driver’s sarcasm is entertainment, and Faris, whose good looks just aren’t taken advantage of, is hilarious.

Mazer’s first attempt at romantic comedies certainly was risky; this is not the kind of film that offers many laugh-out-loud moments, and the comedy that is present in the film occasionally takes away from the romance.

Nonetheless, the film offers a refreshing perspective on young couples and marriage. According to the film’s producer, Kris Thykier, people in their late 20’s and 30’s feel pressure to be in a successful relationship. There is also a social expectation to be married by a certain age or there might be something wrong with you.

I Give It A Year is the one time you won’t be rooting for the couple to make nice and live happily ever after. Instead, you'll want them to follow their hearts and be with someone who gives them happiness - not just security.

I Give It A Year is now playing in theaters.