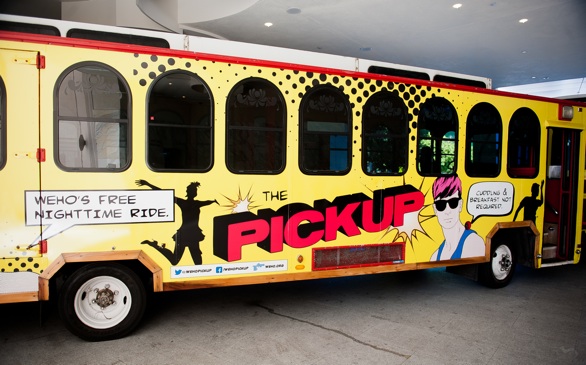 WEST HOLLYWOOD – The City of West Hollywood will launch a six-month pilot project of "The PickUp,” a free late night weekend entertainment trolley on Aug. 16, 2013. “The PickUp” will offer a safe and free ride down Santa Monica Boulevard on Friday and Saturday nights from 8 p.m. to 3 a.m.

"The PickUp Line" is a four-mile long loop with stops every two to three blocks, offering passengers a lift every 15 minutes. The goal of The PickUp is to provide an alternative to the automobile and bring an energetic and playful transit option to one of West Hollywood's busiest nighttime districts. Additionally, the trolley will feature an onboard “photo booth,” "The PickUp Shot," with which riders can capture their ride and upload it instantly to social media sites like Instagram, Facebook and Twitter.

The PickUp aims to steer riders to popular local venues with its flirtatious take on public transit. The soundtrack onboard The PickUp will be a mash-up of the prolific beats of Derek Monterio, one of West Hollywood’s talented DJ's.

Riders of The PickUp will enjoy perks that will make the switch from car to trolley well worth it. VIP entry to The Abbey means no waiting in line to get into the world's most notorious gay bar; plus, two for one Abbey breakfast before noon. Micky’s, WeHo’s flaming gay bar, is offering no cover and priority admission. Hugo’s has one free appetizer with entrée for PickUp patrons. Riders getting off at Fubar get one $1 drink and a stop at Here Lounge gets PickUp riders half off their first drink. New perks will be added throughout the pilot program and will be announced weekly.

The City of West Hollywood is passionate and creative in its approach to city government and has established itself as an innovative leader in municipal programs. In February of 2012 the City launched a pilot car-sharing program in partnership with ZipCar to provide West Hollywood residents, businesses and visitors with increased access to affordable, convenient transportation options that reduce congestion and emissions. In 2011 West Hollywood was named the "Most Walkable" city in California and received 89 out of 100 score for walkable amenities and even beat out San Francisco and New York City. The PickUp is a city-funded program meant to encourage residents and visitors to leave their cars at home or park once and enjoy the nightlife on Santa Monica Boulevard.

The City of West Hollywood’s City Council unanimously approved a $71,000 allocation from the City’s general fund to pay for the pilot project, which will be offered at no cost to riders and will cost the City $110 per operating hour. If the pilot project is successful, the City will consider options for the program to return and look for opportunities to partner with the private sector for sponsorship and advertising to fund it. The program was branded and named by Symblaze, Inc. American GTS, a transportation service based in the Greater Los Angeles area, will be the operators of the line. GTS plans to use its “All-American Classic Trolleys.”

(Please note: This press release was courtesy of Ballantines PR)