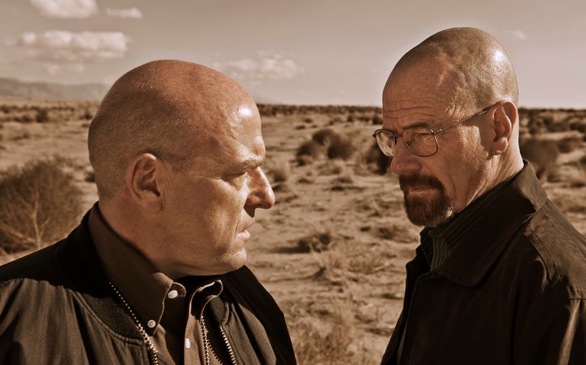 The sixth and final season of "Breaking Bad" premiered on AMC last night, and as expected, it blew our minds.

With seven Emmy’s under it’s belt and 13 new nominations for this year’s Emmy Awards, everyone is expecting this season of "Breaking Bad" to live up to the cinematic hype it has garnered from its previous success. Judging from the premiere, this season is not only going to live up to the hype - it’s going to exceed it.

After last season’s shocking finale, we all know that DEA agent Hank Schrader (Dean Norris) finally discovered that Walter White (Bryan Cranston), his own brother-in-law, is in fact “Heisenberg,” the drug kingpin that Hank had been tracking for more than a year. Viewers spent all summer anticipating the major confrontation that would come during Season 6, but most viewers did not expect it to arrive so soon.

In the season premiere, “Blood Money,” producers wasted no time in setting up the Hank/Walter showdown, giving it to us in an intense scene during the last few minutes of the episode.

Along with the jaw-dropping confrontation, other key moments of the episode include the moment when normally timid Skyler (Anna Gunn) lays down the law on Walter’s involvement in the drug industry, Jesse’s continuous guilt over the “blood money” that he’s earned and, of course, the return of Walt’s cancer.

Everyone involved with "Breaking Bad," from actors to producers and writers, are ensuring that this season is not going to disappoint. After the premiere aired, RJ Mitte, who plays Walt Jr. on the show, tweeted that episode two is even better than the first, and creator Vince Gilligan said to the Daily Beast that they have a “s**tload of story left to tell.”

Episode one left 5.9 million viewers shocked with a million questions: What is Hank going to do about Walt? Will Jesse find out about Walt’s many deceptions? Will any more characters die?