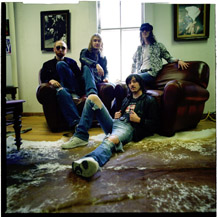 Untitled Document So many bands come through L.A., what makes one group stand-out among the others? Besides solid musicianship and catchy songs, there’s a certain thing I call the "good chills" factor. You know when you listen to a CD or see a band and they are so amazing that the hairs on the back of your neck stand on end and your arms become covered in goose bumps?

To follow are 10 bands to watch in 2006. Check ‘em out and make sure to wear a sweater to be prepared for the good chills.

Led by the fiery Gene Louis on vocals, BNO deliver a distinctive brand of punk rock garnished with a metal edge. Pick up BNO’s The Revelry, produced by former Guns ‘N’ Roses guitarist Gilby Clarke, and immerse yourself in the anthemic high jinks of "Pirates" and "Save Me Sorrow."

Catch one of its shows to really feel the full impact of this enigmatic quartet who just finished a slew of dates with Orange County brethren Avenged Sevenfold. Word of caution: Do not stand in the front row of a BNO show if you get faint at the sight of blood or saliva spewing from a singer’s mouth.

BNO will play Dec. 31 at the O.C. Fairgrounds in Costa Mesa, Jan. 7 at Chain Reaction in Anaheim and Jan. 11 at the Troubadour in West Hollywood. For more information, visit www.bullets-and-octane.com.

UNDER THE INFLUENCE OF GIANTS

How do you classify a band whose music defies any single genre? You don’t. You let the songs speak for themselves. Under the influence of an eclectic mix of artists – the Beatles, Prince, Herbie Hancock, to name a few – the Giants come armed with an arsenal of tunes that will literally move you.

From the disco-like fantasy of "Mama’s Room" to the driving beats of "Can’t Stand," the Giants will have your feet moving regardless of your age, race or shoe size. With their Island Records debut set to hit shelves in ’06, these L.A. Giants will soon be a household name worldwide.

The Giants will play Dec. 21 at the Key Club in West Hollywood and Feb. 17 at the Avalon in Hollywood. For more information, visit www.undertheinfluenceofgiants.com.

Never judge a book by its cover … or a band by its name. EDM are neither your daddy’s Eagles nor your older brother’s Cianide. Formed by walrus mustachioed Jesse "The Devil" Hughes and Josh Homme, EDM are something more along the lines of the White Stripes meets Queens of the Stone Age. No surprise since Homme is the latter’s front man.

Eagles of Death Metal will play Dec. 21 at the Troubadour in West Hollywood. For more information, visit www.eaglesofdeathmetal.net.

After one of this So. Cal foursome’s promo CDs found its way into the hands of Skeleton Crew founders at this year’s Warped Tour, the band was picked up to record the forthcoming Virginité album for the fledgling label.

Lovers of Fugazi, the Pixies, Nirvana will become enamored with HLAR’s screeching guitars intricately laced with thundering drums. Jordan Clark’s lyrics are so raw with pain, joy, and frustration that when mixed with the band’s searing live performance, HLAR leaves a lasting impression you won’t be able to shake from your system for days.

HLAR will play Jan. 14 at On the Rox in West Hollywood. For more information, visit www.hotlikearobot.net.

This modern-day AC/DC is the epitomy of rock ‘n’ roll. The Vacation’s electrifying tunes jump from the speakers straight down your spine.

Explosive live shows have shaken the walls of every L.A. venue fueled by singer Ben Tegal writhing on stage like he’s got a kinetic time bomb ticking beneath his scruffy surface. Twin brother, Steve is the picture of cool as he shreds on his guitar, complimented by the sultry swagger of bassist Eric "Dutch" Suoninen and the frenetic limbs of wiry Denny Weston behind the drums.

Look for the re-release of the group’s Band From World War Zero from Rick Rubin’s American Records in March. Getting a little dirty has never felt so good.

The Vacation will play Dec. 31 at Gallagher’s in Huntington Beach. For more information, visit www.thevacationmusic.com.

From the first beats of "Don’t Go," Monsters Are Waiting won’t stop until they’ve got you bopping like a puppet maneuvered by their danceable beats. The coy teasing of vocalist Annalee Fery’s lures you in, whether you’re listening to their self-titled EP or witnessing them live on stage. Catch them in small venues here in their home base now, while you can.

Monsters Are Waiting will play Jan. 20 at the El Rey. For more information, visit www.monstersarewaiting.com.

In a town where singer-songwriters are a dime a dozen, Hexum’s skill with a plethora of instruments – guitar, saxophone, his powerful voice – is refreshing and impressive. His music draws you in and then captivates with heartfelt lyrics delivered with a genuine sincerity and polish that make it clear this guy has exactly what it takes to make it in this city.

Zack Hexum will play Jan. 6 & 20 at the Hotel Café in Hollywood. For more information, visit www.zackhexum.com.

At first listen, I Am Ghost may seem like any other screamo band, but as you listen further, you’ll realize what makes this sextet so unique. The arresting harmonies of Steve Juiliano and Kereth are like candy for the eardrums.

The balance of Kereth’s vocals peppered into their songs is striking yet completely natural. Don’t let the fact that she plays violin garner comparisons to Yellowcard, this band is more reminiscent of older Thrice. Look for them on the Take Action Tour, as well as their debut on Epitaph.

I am Ghost will play Feb. 4 at House of Blues in Anaheim. For more information, visit www.iamghostmusic.com.

Silverlake staples, the SSF have distributed several discs, but after the release of its newest work, the rest of the nation will know this band. Produced by the legendary Steve Albini, Steady will be unveiled in the spring and is packed with the spacey shoe-gazer rock this group is known for.

The exotic vocals of Marguerite Olivelle soar to ethereal heights as they are layered with effects-laden guitar to produce a sound so rich in texture you will want to pull it over your body like a cashmere blanket.

When you were little didn’t you just love sitting on the floor banging on pots and pans? The primal ecstasy of creating music with found objects – buckets, cooking utencils, aluminum garbage cans – is the idea behind SDC. Bobby Alt (S.T.U.N, Faculty X), Adam Alt (Circus Minor) and Frank Zummo (TheStart) comprise the foundation of the group that formed in 2004.

Since then the trio has established annual summer and fall residencies at Six Flags Magic Mountain and after a stint on Warped Tour, were signed to Kevin Lyman’s Warcon Records. Members of No Doubt and Bad Religion have all sat in on SDC sets. The Used’s Bert McCracken appears on "Flaco 81" which will be on SDC’s forthcoming CD.

SDC will play Jan. 9 at Chain Reaction in Anaheim and Jan. 21 at Bar Sinister at Boardners in Hollywood. For more information, visit www.streetdrumcorps.com.
Article posted on 12/19/2005
This article has been viewed 3025 times.