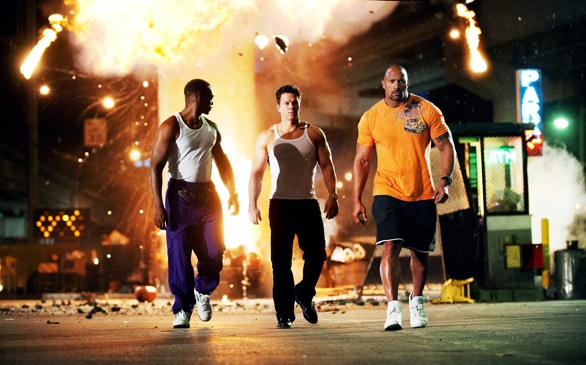 The Majors: No director evokes greater enmity from critics than Michael Bay, whose testosterone-fueled toy commercials masquerading as feature films have been a regular blight on theaters. While Pain & Gain hardly transforms him into the Coen brothers, it's a step in the right direction for Bay, who approaches the film with a bit more restraint than usual. Mark Wahlberg and Dwayne Johnson are perfectly cast as bodybuilders caught in an extortion and kidnapping ring, since both are experts at approaching big lugs with a nicely comic touch. Pain & Gain still has the trademark flash of a Michael Bay film, with its ostentatious displays of wealth, dumb-as-rocks ethnic humor and complete lack of subtlety, but there's at least some attempt at subtext and a decent amount of possibly unintentional self-satire. Pain & Gain is a likable movie that assaults the senses far less than the usual fare.

One of the miracles of filmmaking of the past several years is the emergence of Matthew McConaughey as a respectable actor, and Mud continues McConaughey's development as an actual acting talent. The actor, best known for appearing shirtless in Kate Hudson romantic comedies, once again expands his range in this backwoods melodrama, which stars him as a hermit who befriends two young teens. This is not only a triumph for McConaughey, but one for director Jeff Nichols, whose Take Shelter featured a similarly enthralling lead performance by Michael Shannon. The cast is uniformly good, from the two young teens to Reese Witherspoon, Sam Shepard and Joe Don Baker, but McConaughey is the wonder here.

The Idiot Box: Approximately one million people watch an average episode of HBO's “Girls,” which approximates to one viewer for every 10 articles written about Lena Dunham and her vast influence on culture. The overwhelming majority of people who have thus far ignored Dunham's sitcom can catch up on the show's second season with its DVD release. The second season reveals that the show is not a knowing look at the narcissism of the millennial generation, but a continued display of Dunham's own narcissism, best shown in an episode devoted almost exclusively to her romping naked with a handsome, successful doctor (Patrick Wilson). Other than Dunham, only Adam Driver makes a strong impression as her sometime boyfriend, and for adeptly handling the material Dunham has thrown at him, he deservedly earned an Emmy nomination.

A second signature HBO series, “Boardwalk Empire,” also receives a DVD release for its third season. While “Girls” turned itself inward during its second season to ill effect, this expansive Jazz Age drama had an opposite problem, as it attempted to juggle stories for an increasingly large cast. The show features an embarrassingly rich cast of talented actors, from nominal leads Steve Buscemi and Kelly MacDonald to well-respected character actors such as Bobby Cannavale and Michael Shannon. However, the most impressive may actually be Gretchen Mol, the late-‘90s punch line who fully redeems herself as a gleefully amoral madame. Everything about “Boardwalk Empire” is impressively crafted, but it occasionally suffers from a staid dullness that disappears only when Mol's Gillian Darmody appears to cause trouble.

The fourth season of “Community” is a curiosity, as it's the first season without creator Dan Harmon, and presumably last, since Sony rehired Harmon for the fifth season. Without the guiding hand of Harmon, whose stamp on the material made “Community” such a distinctive series, the fourth season often seems to be a pale imitation. However, the charm and comic talents of the cast (including Joel McHale, Chevy Chase, Donald Glover and Alison Brie) help keep the season watchable. Still, the fourth season proves neither fish nor fowl, not quite the delectable acquired taste of the previous seasons but also lacking the broad appeal that could win over the wide audience that NBC desired for the show.

Blu Notes: Some flops are so legendary that they become more renown than successful films, and no film is more synonymous with box office failure than Ishtar. Directed by Elaine May, the longtime Mike Nichols collaborator and occasional comedienne, and starring Dustin Hoffman and Warren Beatty, the film is a shaggy tale of lounge singers caught up in CIA intrigue. The film receives its first digital treatment with a release on Blu-ray, giving viewers a chance to reevaluate the misunderstood failure, which has its oddball charms.