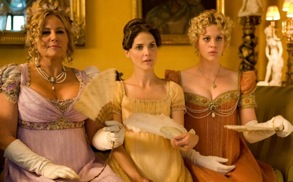 Writer Jerusha Hess has stepped out of the writers’ room, making her directorial debut with Austenland. Hess, who previously wrote Nacho Libre and Napoleon Dynamite with husband Jared Hess, has expanded beyond her traditional role with this new film.

In this take on the Jane Austen classics, Austenland takes you into a dreamlike world of how it once was. Jane Hayes, played by Keri Russell, is a Jane Austen fanatic who knows every detail about this time period and longs to meet her own dashing Mr. Darcy.

After years of collecting teapots, fine china and a life-sized Darcy cutout, Jane decides she wants an Austen experience of her own. She sells her car, quits her job and heads off to an authentic Austen recreation in the English countryside. The uptight owner, Mrs. Wattlesbrook (played brilliantly by Jane Seymour), promises every participant will have a faux love story. No matter what package you purchase, whether it’s copper or platinum, you will still find love by the end of the week with the actors on staff. Optimistically wide-eyed and ready for the adventure, Jane sets off into creating her own novel, blending fantasy with reality.

This film was original from start to finish. Russell has been completely underestimated as a comedic actress, which is a shame. She was able to stand up next to the hilarious Jennifer Coolidge, who plays Miss Elizabeth Charming. In typical American fashion, Miss Charming is not familiar with the Austen books but is just a wealthy woman who wants to have fun and have the sexy butlers on staff fawn over her. There are so many twists and turns that the film never loses its comedic edge.

It was great to see Russell play a very plain Jane, pun intended. The castle’s set-up reminds you of Disneyland, a place of make believe, total fantasy and escape. However, once you peer behind the curtain, some of your ideals get crushed.

The movie is skillfully casted with JJ Feilds (Captain America), Georgia King (The Duchess) and Bret McKenzie (Flight of the Conchords), among others.

Austenland is a fresh film that showcases a traditional story and makes it modern. You feel for Russell’s character as she is now in her 30s and still single, hoping to live out her fantasy life. Hess has made one funny film.

Hint: at the end, stay to see the credits for a very funny little ditty!