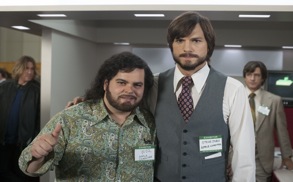 We all know him. He’s the father of Apple products, the guy in the turtleneck who once brought joy to nerds across the world until his death in 2011. His name is synonymous with innovation and technology. One of the founders of Apple, he played a major role in making the company what it is today – not just a product, but a social status.

In the new film Jobs, Ashton Kutcher stars at Steve Jobs, the once free-spirited, barefooted youth who partook in illegal substances and worked on machines in his garage with friend Steve Wozniak (Josh Gad), until that little endeavor turned into a billion-dollar company.

The film spans several decades, approximately 1973 to 2001, but primarily focuses on the early '80s when Jobs famously fought to keep his authority at Apple, clashing with the board members and then-president John Scully. He took a 10-year hiatus from employment at Apple, but when he returned in 1996, he brought with him generous amounts of new ideas that would eventually lead to the iPods, iPads and all Mac devices that we know and love to this day.

Here’s the thing: if you, like me prior to seeing the movie, like Steve Jobs because you know absolutely nothing about him and envision him as the dying man in a turtleneck whose only goal in life was to inspire young people and make kick-ass phones, and if you want to maintain this image of him, then this movie will certainly open your eyes to the, slightly dramatized, truth. In these regards, Kutcher is in top form; you definitely don’t like him through most of the film.

However, it still remains difficult to see him in a different light. To some extent, Kutcher will always be the funnyman, sitcom star and "Punk'd" creator we know and love. He is met with a particularly difficult role in this film, as he tackles the neurotic and vindictive character of real-life techno-warlock Steve Jobs. In his defense, Kutcher took the role very seriously. He briefly became a fruitarian, maintaining the purely fruit diet that Jobs was known for and was even hospitalized due to problems with his pancreas two days before shooting.

A quote-unquote good biopic does not necessarily require perfectionism when it comes to physical appearances. Despite Kutcher’s spot on genetics, it is Gad who steals the film portraying Wozniak. The resemblance isn’t 100 percent, but Gad brings the most heart and humor to the film.

Jobs is screenwriter Matt Whiteley’s first feature film, and, despite its running time, the film maintains an even pace, keeping the dialogue fresh and the action steady throughout.

With Aaron Sorkin’s writing and David Fincher’s direction, The Social Network tackled the interesting character that is Mark Zuckerberg with the appropriate mixture of humor and drama. Jobs follows in that vein, unveiling the history behind mega mind Steve Jobs, however harrowing the truth may be.

Jobs is currently playing in theaters.