EstaBoN Perion: An Emerging Rapper Representing More than Just Himself 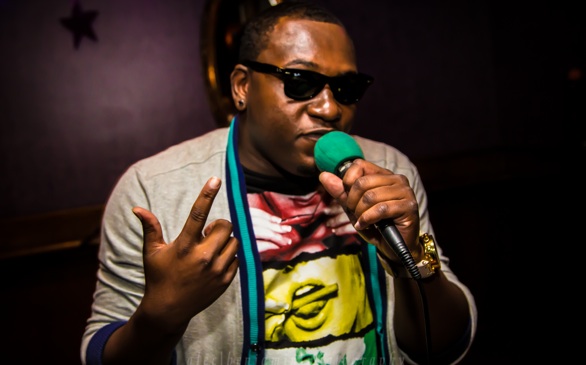 EstaBoN Perion will be on tour this fall.
(Credit: Alec Benjamin Photography)

When I was first introduced to EstaBoN at a USC house party in early spring, I immediately noticed something about the rapper that made him different. Perhaps it was his omnipotent presence on stage or his ability to keep lyrics flowing like the Garden of Eden. Whatever it was, it was clear EstaBoN had something special.

EstaBoN’s journey isn’t just a battle for himself, but for his label. Started by his close friends, EstaBoN is the only artist signed to Life In Motion Entertainment (LIME), and its success strongly lies in the rapper’s hands, making his career truly unique.

I first spoke with EstaBoN after he had just finished an incredible performance opening up for Bone thugs-N-Harmony at the Rave in Milwaukee. “The show was something else. It was great to look out there and have eye contact with all your listeners and see them really enjoying your music,” he happily recalled.

Although EstaBoN’s horse is beginning to ride high, it hasn’t always been this easy for the rapper. He shared of his journey, “It’s been long, definitely long. From growing up in a rough neighborhood in Detroit, to moving in with my Aunt in Chicago as a teenager, to now. Music has always been in my family, but I’m the first one to take it this seriously and make a career out of it.”

EstaBoN remembers spitting his first rhymes after being inspired by Jay Z’s “The Blueprint” in 2001, but his official career with LIME only began last October. Being LIME’s only artist has never seemed to bother the lone soldier.

“It’s challenging, because it allows me not to take any breaks,” said EstaBoN. “I always have something to strive for, to prove myself worthy. It’s a lot of responsibility and a little bit of pressure, but at the end of the day it’s all fun. If there was another artist underneath the label I probably wouldn’t grow as much, because currently all the focus is on me.”

Although the artist and his label have been long time friends, their professional relationship began with some banging orange chicken, cell phone beats and, of course, a little “recreational activity.”

President of LIME, David Nicholson, ecstatically laughed about their first official business meeting. “We’re all home from college, pretty sure at Panda Express and [EstaBoN] was like ‘you know I’m still rapping.’  He started pulling beats up from his phone…and does three or four songs, I think ‘Gotta Get It,’ ‘Uncaged Lion’ and ‘Hear I Stand.’ I’m blown away. He’s rapping, he’s singing, the lyrics are good, the melody is good. I’m just sitting there banging on my orange chicken in awe. Not even within a few hours, I’m hitting up Kevin [Rakestraw] and telling him we got to hit up EstaBoN for the label.”

LIME originally began when founder and CEO Rakestraw’s previous entertainment venture, Young Nation, didn’t quite fruition as he had planned in 2009. In 2011, the early executive sought the help of his close friends to begin creating something greater, Life in Motion Entertainment. A little less than a year old, LIME has made some serious steps as a company and as well in advancing EstaBoN’s career. They have begun branding the EstaBoN name, creating a recognizable voice and persona.

The official foundations of a rap career have been coming into place nicely for EstaBoN. Through playing various shows, turning out new music and videos via social media, handing out free CDs and getting advice from influential industry members, EstaBoN is patiently building his empire.

“I see myself as a multimillionaire. We’re about to release my second album worldwide, so ideally that’s really where I see myself in five years, worldwide, ” he said.

“Before you know it things are rolling. But at the same time things aren’t rolling,” admitted Nicholson. “I feel complacent and happy with what we’ve done, but we want more. We’re thirsty, hungry and ambitious. We’re trying to keep the momentum going, keep the life in motion.”

Although the rapper has high hopes, he’s able to remain realistic as well, understanding the difficulties of breaking into the music industry and knowing when to quit the demanding and cutthroat environment that surrounds it.

“The most important thing to me is being able to juggle my friends, family and label, which I feel I have. I’m 23 right now. If we’re not good by 27, I might have to call it quits. I don’t see that happening, but that’s probably my boiling point. [But] knowing me, I’m a serious competitor, so I might still be stubborn and keep going at it,” said EstaBoN.

The drive doesn’t seem to be lacking on the LIME end either, as Nicholson insisted, “The only time I could say enough is enough is if I don’t have the motivation to do this LIME stuff anymore. Everyone has their ups and downs, days you’re not feeling it, but right now I always have the motivation to do something for LIME, no matter what position we’re in financially.”

Although being limited in both fiscal and influential resources, LIME has done pretty well. They realize the biggest resource isn’t just money; it’s also who you know. This value is what helped influence the team to bring on Los Angeles resident and Westchester, N.Y. native Brandon Fox as Estabon’s full-time manager.

Fox stepped on board over the spring, bringing EstaBoN out to L.A. to perform at USC and film his first official music video for his single “Chaos.” It was in early June when Fox officially began managing EstaBoN full time.

Currently, EstaBoN is playing a string of shows amidst the Mid-West over the next couple weeks. From there, he’s getting ready for a fall tour, hoping to extend his influence well past the Chicago suburbs and deep into the coastal United States.

Although the name EstaBoN Perion might not be on hip-hop’s list of “most influential,” the artist is certainly on the right path to get there. Drawing style from Kanye and producing deep-seeded content similar to J. Cole and Kendrick Lamar, EstaBoN has all the right tools to tear down the big stage. When that time finally comes, expect a musical revolution to follow.