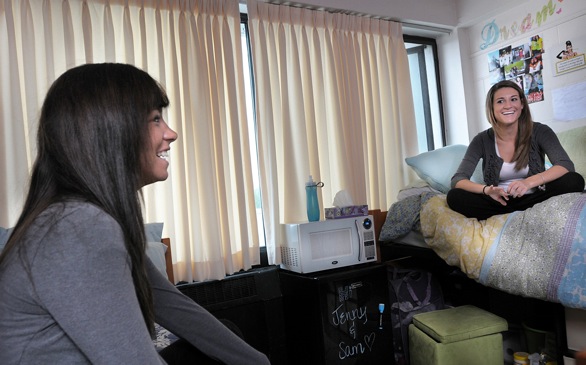 Having a roomie can be less drama and more smiles if you both remain civil towards one another.
(Credit: Michael Karas/The Record/MCT)

College campuses have the perfect recipe for a spike in bad manners: Start with young people leaving home for the first time. Move them in with total strangers. Add alcohol (it happens). Then sprinkle in today’s technology and small living quarters.

In my writing class at Rowan University in Glassboro, N.J., I occasionally ask my students to write about how to make the roommate relationship work. Each time, we hear stories of beautiful friendships. But we also hear about the partying roommate who thought the refrigerator was the bathroom, or the “roomie” who assumed her boyfriend could also move in, or the fellow student who didn’t think his blaring music would affect anyone’s studying. In addition to just our human frailties, technology has added another layer of drama.

The most famous local case, and one where cyberbullying played a role, is the tragic story of Tyler Clemente, a student at Rutgers in New Brunswick, N.J., who jumped off the George Washington Bridge in September 2010 after his roommate spied on him with a webcam during a romantic encounter with another man. It was a rare incident, but roommates without any consideration for others have been known to end other students’ time at college or, at the very least, disrupt daily life.

Consider Julie, a 20-year-old from Lower Merion, Pa., who attends college in Colorado. She had a suitemate who got in an argument with another woman in the suite and then insisted that everyone pick sides after the two in the disagreement stopped speaking. “It was kind of awkward,” Julie said. “Then she got her mom involved in it and eventually she moved out.”

That suitemate was followed by an apartment roommate who didn’t understand that the other women didn’t want to clean up after her, including the disposal of the raw chicken she left sitting in a pan on the stove for a day. “Everyone has certain things about them that you learn when you live together, but you have to be responsible for yourself,” Julie said. “Don’t make other people clean up after you.” And the final rule: “Choose your roommates wisely.”

Unfortunately, people who need a roommate don’t always have a choice. In 17 years of working at Rutgers University-Camden, Allison Wisniewski, associate dean for student affairs, has seen the good, the bad, and the downright rude in roommate situations. There are 700 students living on campus, and for 200 of them it’s their first time living away from home.

“The No. 1 thing that happens is that they don’t discuss issues and then they fester,” she said. “You have to have conversations up front. Talk about how you are going to share things.”

The school uses a “roommate agreement,” in which the people involved write down rules early in the semester. Such a contract can provide guidance on everything from who cleans up what to when guests can be in the room. However, should problems arise, talking face-to-face, instead of taking one’s anger out online, is strongly encouraged. “Social media has definitely added to problems,” Wisniewski said. “It’s easy to write about something not thinking what the consequences will be.”

Rich, who attends a university in Philadelphia, had a suitemate who took his grievances to Twitter.

Rich’s sin was coming home after a night out and microwaving chicken nuggets. In the process, he unplugged his roommate’s coffeepot, not realizing that it was set to make coffee in the morning. When Rich and his other suitemate woke up, there was a note in the kitchen: “Thank you for ruining my morning.” Then friends started asking, “Did you see what’s on Twitter?” The tweet from the non-caffeinated roommate was about the “great” start to his day thanks to his offending suitemates. The hashtag was “morons.” Now that Rich doesn’t room with his unhappy suitemate anymore, they get along fairly well. “We felt like everything we would do would make him angry,” he said. “And his response was passive aggressive.”

The rules for making peace with roommates are not much different than the basic etiquette that makes life better for everyone. To get you started this fall, try these tips from local students and Rutgers roommate agreements:

If you make a mess, clean it up.

Decide ahead of time what you will share, who will buy what, and when guests are allowed.

Talk about volume on movies and music, and about your schedules. If you have an 8 a.m. class on Wednesdays or a 6 a.m. practice, let your roommate know.

Don’t use social media to air your complaints.

Be honest and talk to your roommate when something bothers you.

Don’t bring a pet to the apartment without getting your roommate’s permission (yes, this really happened).

Living with your best friend doesn’t always work out.