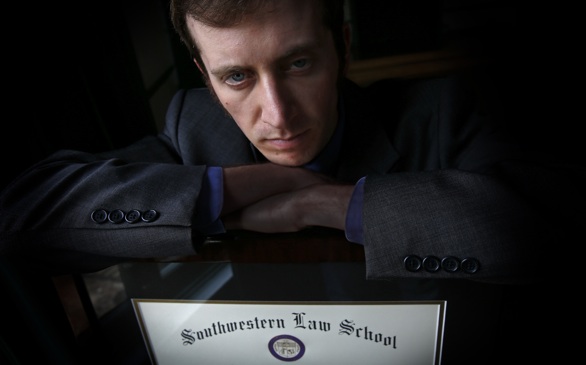 But faced with growing alumni complaints that they can’t find employment, Dean Victor Gold and other administrators decided this year to do something they had never done before: They accepted fewer students.

Loyola, southwest of downtown Los Angeles, took 20 fewer applicants than last year, about an 5 percent drop — and a loss of about $1 million. The incoming 360 students are about 15 percent fewer than the school has averaged over the last decade, Gold said.

Loyola is one of a growing number of law schools, including the University of California Hastings College of Law, Northwestern University and George Washington University, that are trimming class sizes. A 2012 survey conducted by Kaplan Test Prep found that 51 percent of law schools have reduced their incoming classes.

The move comes amid a number of factors affecting law schools and students, including an overall reduction in applicants, a dearth of available jobs and students who don’t want to be saddled with huge debt from high tuition.

In addition, some administrators are trying to accept fewer students with low entrance exam scores and grade-point averages who could drag down schools’ important rankings in U.S. News & World Report.

The trend toward lower numbers of students began a few years ago. In 2011, fewer than 50,000 students started their first year in a juris doctor program, 7 percent less than the year before, according to the Law School Admission Council.

In California, which has about 21 accredited law schools, the first-year class at USC’s Gould School of Law shrank by 11 students last year, while UCLA’s is about 15 students smaller this year compared to last.

“It’s common sense,” said Brian Z. Tamanaha, a law professor at Washington University in St. Louis who has written extensively about the business of law schools. “People know that a lot of graduates are not doing well and that (law school) is a huge expense, so they question if it’s really worth it.”

Loyola administrators made the move to cut class sizes soon after the school fell 17 places — from 51st to 68th — in the most recent U.S. News & World Report’s rankings.

Much of Loyola’s drop is due to California’s soft job market, which meant graduates couldn’t find work, Gold said.

“Reality has caught up to higher education,” said Gold, who has served as dean since 2009. “The job market is still very slow, and we have a moral obligation not to just take tuition dollars and then turn a blind eye when our graduates can’t find jobs.”

Prospective students look closely at national rankings to decide where to apply, and schools typically use them for publicity and to attract donors. These listings take into account schools’ selectivity, job placement and bar exam passage rates, among other things.

“Schools are in a tough financial position. Rankings should not drive students away or toward schools, but they do,” said Paul L. Caron, a law professor at Pepperdine University. “So small moves can have very significant consequences.”

Gold acknowledged that Loyola’s move was partly to protect the school’s image — “I wouldn’t be honest if I said rankings don’t matter,” he said — but added that it wasn’t his main motivation to drop class size.

Universities that fall below the top 20 in law school rankings are more likely to see enrollment declines, while schools at the bottom of the list “will continue to take as many as they can enroll,” Tamanaha said. Others say the top-tier schools are not as adversely affected.

“It’s the schools in the middle that have to compete more by either giving more scholarships or dropping their class sizes,” Tamanaha said. “There are a bunch of schools that are doing both and are still seeing reductions in their” incoming class test scores.

At Hastings, which placed 48th in the latest rankings, 20 spots ahead of Loyola, administrators cut their class by nearly a fifth last year. The first-year class of nearly 320 students was the lowest in school history.

The San Francisco school also cut 10 staff members and offered buyouts but did not lay off professors, said Frank H. Wu, the dean and chancellor.

Wu said Hastings and other law schools need to “reboot the system” in the face of declining enrollment.

“I’m not a visionary. I’m just looking at the numbers, and you’d be an idiot not to see what these numbers mean,” he said. “We have produced a glut.”

At Loyola, about 80 percent of the class of 2011 found work, nearly 15 percent fewer than the class of 2010. The number of graduates who worked in a position that required them to have passed the California bar had fallen by almost a fifth over the same time.

Unemployment, Gold said, “is the No. 1 complaint. It’s also the No. 2 complaint.”

Though this is the first year Loyola administrators decreased class size, the campus had already been attracting fewer students, dropping from 418 six years ago to 380 last year.

One of Loyola’s best-known critics is known online as “Loyola 2L,” who said he was a student there. He posted anonymous comments on many websites in 2006 and 2007 saying that he had trouble even getting job interviews because he did not rank in the top 10 percent of his class.

“Now I’m in massive debt and have been taught a hard lesson. … Students from tier 2 schools aren’t allowed to have good jobs, despite all the money and work we put into the education,” he wrote in one online posting.

Gold said he was following Hastings’ example. “It seemed to me that, if we could pull it off, we should do it as well — as long as we could protect the academics,” Gold said.

Key programs such as the school’s moot court and those that train students for careers in public interest or sports law will not be affected, Gold said. He added that he hopes to save money through staff attrition and other programs designed to reduce expenses, including solar panels at the Frank Gehry-designed campus that should make energy costs cheaper.

But Gold said he can’t be sure what other steps Loyola will have to take to trim its budget. “Talk to me in three years,” he said, after all the larger classes now enrolled are replaced with smaller ones.

Meanwhile, the state’s newest law school — at the University of California, Irvine — has been steadily growing but maintaining, on purpose, its small size. This fall, Irvine will have 129 incoming students.

UC Irvine Law School administrators have always planned to have between 180 and 200 people per class, said Dean Erwin Chemerinsky, who said keeping the student body small gives students more access to professors while also allowing the school to break even financially.

Chemerinsky said all recent graduates have been able either to find legal jobs or continue their studies.

Gold said he hopes that smaller classes will lead to better employment prospects for Loyola graduates.

“It kills me,” he said, “when our graduates pay what they pay and can’t find a job.”