Counting Down to MTV's VMAs: 5 Things We're Excited to See This Year! 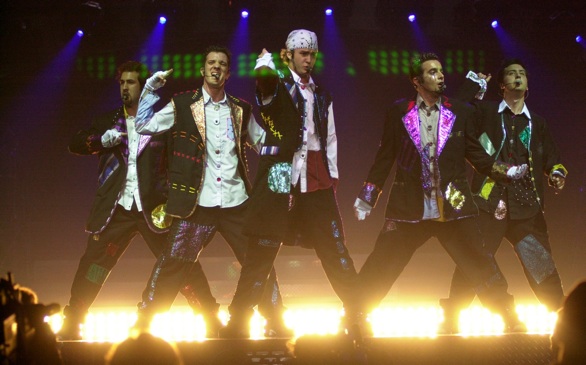 A 'N Synch reunion?! We're praying to the boy band gods that this does happen!
(Credit: MARK CORNELISON/MCT)

MTV is hosting its annual Video Music Awards Sunday, Aug. 25 at 9 p.m. Eastern time. There will definitely be a lot going on this year and many unexpected surprises. Here’s our list of the five things we will anxiously be waiting to watch!

#5 Who wins best song of the summer
Summer is always the time when tons of artists release new songs trying to capture the title of "summer song anthem." The competition is tough as Miley Cyrus, One Direction, Selena Gomez, Calvin Harris, Robin Thicke and Daft Punk are all nominated in this category. You can catch a peek at who is in the lead over at MTV’s official website since fans are allowed to vote via social media by using certain hashtags. We like each song just as much as the other, which makes the revealing of the winner even more suspenseful and exciting!

#3 Lady Gaga’s opening show performance
Lady Gaga always shocks when it comes to the VMAs, whether it’s from her famous meat dress, fictionally being hung during her performance of "Bad Romance" or performing as a man. Lady Gaga is set to open the show once again with her new single "Applause," which released to mixed reviews earlier this month. It’s always a mystery as to what she will do, but you can count on being shocked by her performance and probably what she wears.

#2 Justin Timberlake to receive the Michael Jackson Video Vanguard Award
Justin Timberlake is set to be honored this year by receiving the Michael Jackson Video Vanguard Award, also known as the Lifetime Achievement Award. Timberlake has been a member of the music industry for the last 18 years. He is joining the ranks of elite performers like The Beatles, Madonna, Guns N’ Roses and Britney Spears. Spears was the last one to receive the award two years ago. We wonder if that will be awkward for Timberlake, but we're sure he’s honored to have been chosen for the award.

And most importantly, #1.....THE RUMORED 'N SYNC REUNION!!!!
We’ve all heard the rumors by now that there could possibly be a 'N Sync reunion at this year’s VMAs. The rumor hasn’t been confirmed, but members of the band keep implying that the rumor is just that, a rumor. Lance Bass stated on his own SiriusXM radio show, “Dirty Pop with Lance Bass,” that the rumor most likely started when he posted a photo on Instagram of Joey Fatone, Chris Kirkpatrick and himself at Timberlake’s Miami show. He went on to state that the rumor was false, but it doesn’t help that Fatone arrived today in New York City. This is one rumor that we desperately hope is true and for those that doubt the rumor, just remember that Michelle Williams originally denied the Destiny’s Child reunion rumor at the Super Bowl...