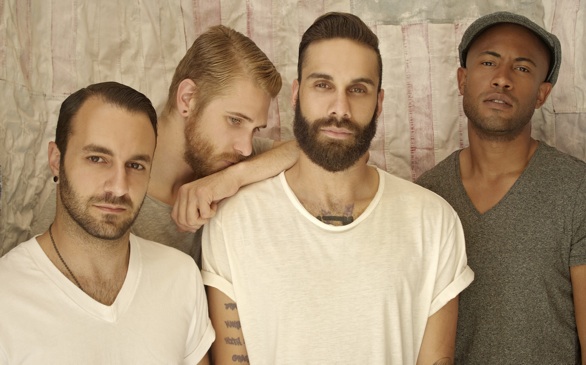 There are many honors one may receive in the realm of rock ‘n’ roll. Grammys, platinum records, those things come with the territory. But being voted the No. 1 greatest rock star in the world? That’s just ludicrous and yet precisely the honor that was bestowed on letlive. front man Jason Aalon.

Thankfully, Aalon is no Kanye West. He commented on the honor of being named as the No. 1 rock star by Kerrang! magazine: “It was kind of punk in a way. They [Kerrang!] are a pretty big publication who put this no name dude, who’s a little bit of a terror on stage, as No. 1 rock star or whatever. I think in my mind it is satire because I’m not a rock star by any means.”

The unexpected honor put the then relatively unknown rock band on the map. Aalon continued, “The most significant and noteworthy part of that was that it illuminated and brought attention to the band that most of those readers had never heard of. We’re very, very thankful for it.”

It’s no secret that front men generally seem to develop into the most infamously colorful characters of the band. And that’s okay for Aalon. “I think it’s just part of being an artist. You get to present yourself in a manner that you typically cannot,” he said. “What I do on stage, I can't do that when I’m in the ‘real world.’ You can’t just walk around the street doing what I do on stage. (laughs) Well, I guess you could, but you’d probably be institutionalized.”

And despite the aforementioned honor, the whole front man thing is much simpler than that. “Anytime I’m granted an opportunity as an artist to be an artist, I definitely take advantage and seize those moments on stage,” said Aalon. “I guess I’m just being appreciative and grateful and paying homage to the creative sense of self.”

Aalon and his band released their third full-length, The Blackest Beautiful, on Epitaph records this July. Fusing a myriad of seemingly contradictory sounds, genres and influences, the album certainly stands out in a year packed with amazing heavy music.

“Even if it’s heavy or pissed off, there’s a groove and we try to honor that and all the associated schools,” said Aalon. “I wasn’t consciously sitting there thinking, ‘I’m going to make this sort of Frankenstein music with R&B or soul vocals over heavy music.’ As I got older, I realized that it was a bit atypical and I enjoyed it. So, I tried to enhance it in every practice, every show. [For] every album, I tried to sort of focus on that as a singer and as a writer in the band.”

The band isn’t shy about citing the soul influence in their music, and with a background like Aalon’s, it’s not a surprise. The native Angeleno was born into music. “My father was in soul bands bands, so I grew up with that sh*t when I was a kid. For me, those were the first artists that showed me what performance was like… Michael [Jackson] and James [Brown],” he said.

Thankfully, that’s hardly the end of Aalon’s musical education, as noted that “through skateboarding, [he] found out about punk, which was so subversive and it was so focused on being an individual.”

He said, “At that time when you’re that young, that’s all you want…to be an individual. It definitely spoke to me in a manner that no other music had. So, I started listening to Black Flag and Minor Threat. Henry Rollins was certainly one of my biggest punk rock influence.”

Aalon’s fusion of Michael Jackson and Henry Rollins may seem bizarre, but in a genre filled with cookie-cutter formulas and yawn-inducing stage presence, bizarre might just what we need.

The band has just wrapped up a stint on the Vans Warped Tour and will be playing an album release show at the Troubadour on Sept. 4 before heading out on a full world tour in support of The Blackest Beautiful.

I’ll stop short of making any moves like Jagger references and just cut to recommending letlive. to music lovers looking for a little more spark and soul in their rock ‘n’ roll. After all, telling your friends you saw the world’s greatest rock star live on a Wednesday evening at the Troubadour is way more impressive than reruns of “America’s Top Model.”