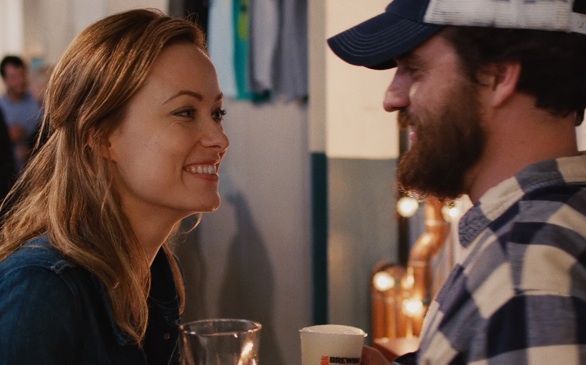 Olivia Wilde and Jake Johnson performed many of the scenes improv-style in Drinking Buddies.
(Credit: Courtesy of Magnolia Pictures)

There’s nothing more fun, and potentially destructive, than a hot friend from work. The situation gets especially tricky if the two of you are employed at a place that manufacturers beer, the kind of place where a pint or two at lunch is actually encouraged. Play this hypothetical out with Jake Johnson and Olivia Wilde as your star crossed co-workers and you, my friend, have got yourself a movie!

Drinking Buddies is the story of Luke (Johnson) and Kate (Wilde), employees at a craft brewery in Chicago. Luke and Kate are indeed close, and no doubt compatible, but they are both individually in relationships, so they never had that opportunity to maybe cross the line. When the two of them end up on a double date to a house in the country for a weekend, mild chaos ensues, and their friendship quickly becomes questionable.

One of the best things about Drinking Buddies is that the performances in this film are very authentic. The dialogue is conversational and realistic. The characters are detailed and intelligently flawed. It feels like less of a comedic spectacle, and more like the unfolding of a low stakes, real-world drama.

This feeling of authenticity is accredited mostly to the fact that the dialogue of this film is entirely improvised. Johnson explained in a recent interview with Campus Circle, “The director would literally say, ‘This is what needs to happen in a scene now. Find a way to do that; find the way that your character would do that.’”

Director Joe Swanberg used his script as an outline, rather than a concrete set of instructions. The actual content of each scene was left to the discretion of each individual actor. Their input and the direction of each improvised scene thereby altered the tone and eventual outcome of the final film.

What Swanberg ended up with was an intriguing and harmlessly provocative take on some surprisingly complex relationship issues. Drinking Buddies prods at your fantasies of acting on a workplace romance and even goes so far as to suggest some hypothetical as to how that might turn out.

Wilde crosses some moral boundaries in her portrayal of Kate, the brewery’s only female employee. She described how Swanberg’s process of improvising individual scenes allowed her to really add a certain dynamic to her character.

“It’s empowering as an actor,” she said, “because instead of us conforming to a set character, the characters were molded by us, through us. I think that’s why the performances were so good. I think everyone is so good in it, and I think that’s because everyone is really honest and not forcing themselves into a mold that they don’t necessarily fit in.”

Johnson elaborated, “I think that’s really the brilliance of our director…Whatever we would have brought, let’s say Olivia and I on day two got into a political debate and hated each other... that contentious relationship then would have been Luke and Kate, and Joe would have made the movie about two people who hate each other.”

Swanberg added that he was really aiming to create something with Drinking Buddies that was inherently more intelligent than a typical romantic comedy. He remarked that these days, “sadly, there aren’t many complex, contemporary adult movies. I’ve been allergic to just doing what everyone else is doing.”

Swanberg achieved that level of intelligence through a vivid use of detail and an approach that was effective because it was well executed. The plot line is subversive; the characters rely on poignant idiosyncrasies to illustrate who they are. There’s a lot going on on-screen; it’s not all about a few attractive couples set in the backdrop of a brewery.

That being said, the beer is definitely one of the more enjoyable cast members in this film. Drinking Buddies is especially fun to watch because it captures a genuine snapshot of the craft beer community. A bulk of the film was shot at a working brewery in Chicago. Wilde explained, “We were really lucky because we were shooting in the Revolution Brewery that we were pretending to work for.”

She went on and said the exposure to a working brewery added depth to the cast’s performance. “We were so embraced by that community. They were helping teach us about the different varieties of the beer, and we each had to learn about which one we preferred so that we could talk about it in our improv… We had to learn it to be able to talk about it,” she said.

“They really made Olivia learn more about the process,” added Johnson, “because her character has to sell it. I was in the back actually brewing with the guys.”

For Johnson, Wilde and Swanberg, Drinking Buddies was just a lot of fun to make. “We didn’t make the film for the result,” said Wilde. “It was only for the process.”

Added Johnson, “It was a unique, labor of love movie, and it was a lot of fun to do.”

Drinking Buddies opens Friday, Aug. 30 in Los Angeles. A fun little romantic comedy that will leave you desperate for an IPA by the end, it’ll make for a really great date movie…maybe you should take that cutie from work you keep flirting with.