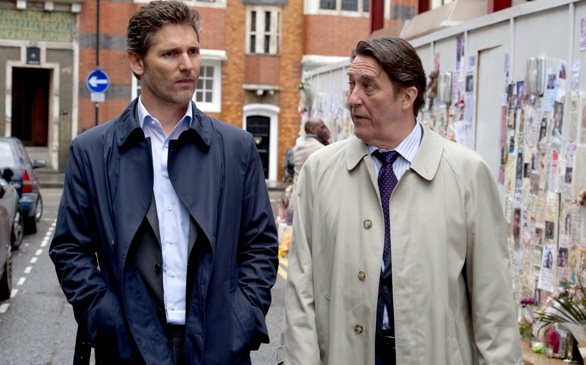 Director John Crowley (Boy A) and writer Steven Knight (Dirty Pretty Things) put out a current and relevant film with Closed Circuit, a film that could have taken its cues from the real-life news stories of Bradley Manning’s recent conviction.

The film literally starts with a bang when a bomb is set off in the bustling Borough Market in London, killing hundreds. Following the explosion, foreign-born Farroukh Erdogan (Denis Moschitto) is arrested and must endure a trial. He is assigned to public attorney Claudia Simmons-Howe (Rebecca Hall), who is his closed court attorney and special advocate. The evidence in this case is so private that not only is the public not allowed to know all of the information but neither is the defendant.

Attorney Martin Rose (Eric Bana) is suddenly assigned to the high-profile case after his mentor committed an apparent suicide. The case has so many rules around it that he and the special advocate cannot communicate once the classified information has been seen. To complicate matters, Martin and Claudia once had a previous romantic affair that ended his marriage. As they dig deeper into the case, serious revelations and repercussions begin to arise.

It’s evident in the beginning of the film that we are living in a post-9/11 world, with cameras set up everywhere catching our every movement. It feels invasive, yet it’s honest. It’s a necessary evil and once the explosion goes off, it gives fast clues.

Throughout Closed Circuit, you get the eerie feeling that you’re being watched, which amps up the suspense. Also, the film manages to create a sterile and cold city that feeds into the viewers’ discomfort.

Great casting helps round out the film with cameos from Julia Stiles (Silver Linings Playbook, The Bourne Ultimatum), Jim Broadbent (Cloud Atlas) as a slick attorney general who carefully minds his words and Ciaran Hinds (Munich) who plays Devlin, a mentor to Rose.

The film addresses the idea that there are “higher-ups” who manipulate and have things appear one way when, in reality, there are much deeper issues at the core. This is nothing new to anyone who believes in conspiracy theories or watches the daily news. However, it still makes for an exciting thriller.

Kudos to the suspenseful score that makes us feel uneasy as we watch the events unfold. I would recommend staying away from watching the trailer since it gives away too many key twists in the plot.

Closed Circuit may not tell a brand new story, but it still is a fun one to watch.