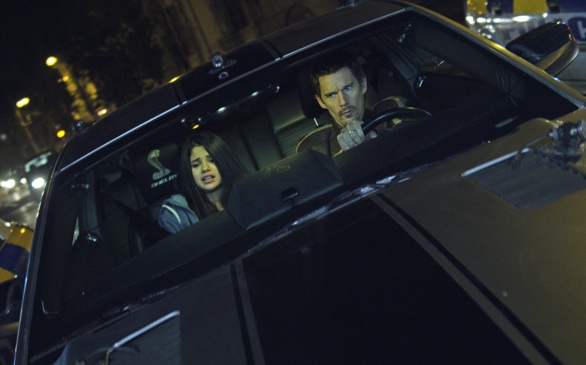 It's been quite a year for the stars of the new movie Getaway.

Before she turned 21 last month, Selena Gomez hit No. 1 on the charts with her first solo album, Stars Dance, and its single, "Come and Get It." That wasn't long after the hotly praised-and-reviled party movie Spring Breakers broke box-office records, as well as her Disney TV princess image.

For 42-year-old Ethan Hawke, there was a spring of both critical and commercial regeneration. Before Midnight, the third film in the talky romantic trilogy he's made with co-star Julie Delpy and director Richard Linklater, topped critics' lists of the best movies from the first half of 2013. And in June, he headlined the low-budget thriller "The Purge," which not only won its opening weekend box office race with $34 million but became a social media sensation.

Now, in Getaway the two actors spend most of their time in the front seats of an armor-plated Shelby Super Snake Mustang, tearing up the nighttime streets of Sofia, Bulgaria.

He plays the remarkably named Brent Magna, a disgraced professional race driver who just wants to lay low with the Bulgarian wife he adores. She's known only as The Kid, a trash-talking automotive and technology wizard worlds away from Waverly Place.

Magna's wife is kidnapped at the behest of a mysterious voice (well, Jon Voight trying to sound like Max von Sydow). Over cell phones and, later, the Shelby's communication system, the voice orders Magna to get in the car and drive increasingly recklessly if he ever wants to see his woman alive. At some point, the gun-toting Kid jumps into the passenger seat claiming the wheels belong to her.

Though it sounds like a generic action thriller, Getaway was put together in an unusual way by director Courtney Solomon (An American Haunting) that afforded unique acting opportunities.

"I would say 95 to 98 percent of the movie I'm sitting in the same place," Hawke notes. "It's part of why I did the movie. There's something so unbelievably simple about the concept. The whole movie is just one car chase, really. It seems kind of fun to do a whole movie from a cockpit."

It wasn't easy to essentially act out an entire film from the chest up, though.

"When we were in the car for too long, a couple of times Ethan and I would get out and run our lines walking around," Gomez reports. "We would stretch our legs and see how we would physically do it and then go back to the car, just because it is such a tedious process of being in the same seat in the same clothes every day, having 10 pages of dialogue to deliver in that one area. So it was kind of hard, but we tried to freshen it up."

An enormous help was the fact that months before Gomez and Hawke arrived in Sofia, the main production unit and stunt team shot most of the film's chase sequences and hair-raising car crashes, flips and near-misses (Gomez estimates some 130 vehicles were wrecked for the film). The actors got to see all that footage --which remains to this day free of CGI effects --before playing their scenes.

"That was another reason why this was so different from anything I'd ever done before," Hawke says. "We would come in and sit and they would just show us this huge car chase, these crashes and ridiculous stunts. It was real obvious what the tone and mood of the movie was, and it was really helpful.

"Usually, the stunts are done by some second unit team after the movie's over. You're just kind of told to imagine 'Well, we're pretty sure a car is gonna flip over here.' In this situation, we actually got to see it, so I could be like, 'OK, I can help sell that shot. I'll give this kind of look or do something, I know how to make that work.' "

Hawke did train at an Ohio racing school before he came to work. Actual driving for the production was limited to four days, though.

"At the end of the movie, of course," he says with a laugh. "They always throw this on at the end in case anything bad happens to you."

"When we first got there, I got in the car with Ethan and he starts driving like a madman and I'm freaking out," Gomez reveals. "But it was a chance for me to experience what it would feel like because when we were shooting the movie we were actually being towed and he would be driving a little bit, but it would be going 40 miles per hour. Which was fast, but it wasn't as fast as moving how others would perceive it."

Was Gomez disappointed that she never got to drive the muscle car?

She sounds sensible. In fact Hawke, who knows something about the ups and downs of youthful fame, was quite impressed by the way Gomez is handling her high-profile celebrity life.

"I see her situation in an interesting light as somebody who's as old as I was right after Dead Poets Society," Hawke recalls, referencing his first 1989 hit. "She seems to have a good head on her shoulders, but it's a very difficult gantlet to walk through: people writing about your love life, people taking incredibly trivial things seriously but you're, somehow, not supposed to even though everybody else is writing and talking about them. It's really confusing. I'm all grown up now, so I found all that very interesting.

"I'm kind of excited for her," added Hawke, who has published two novels, written and directed films and will play Macbeth at Lincoln Center in the fall. "For me, having a lot of different, varied interests was one of the things that helped me survive. And one thing I think is very appealing about her is that she has a genuine interest in acting and a genuine interest in music. It helps keep you humble because it keeps you learning."

Gomez agrees. That's why she's making an effort to act in projects that stretch her and have no association with her Disney kid past or the fact that she's dated a tween pop superstar.

It's not the easiest route.

"Obviously, when I try to get hired, people are going to look at me a little differently and that's a little frustrating," Gomez admits. "That's why I do have to show up at the house and knock on the door and audition for them, prove to people that I can do this, I promise, if they'll give me a chance. That's a little hard, but it's OK, it kind of feels like I'm starting all over again, which is fun. And then I feel like I've earned the part as opposed to just it being given."

Musing on his own career resurgence this year, Hawke offers some perspective.

"It seems strange to me," he says. "Maybe it's true of everybody's life, but my life sure seems to work in weird chapters. There seems to be a new one every now and then. When I first started, I spent five or six years as the kid from Dead Poets Society. Then the whole Gen X thing happens, then there's a Training Day chapter when you're doing that kind of thing. There are all these different periods in the life of an actor.