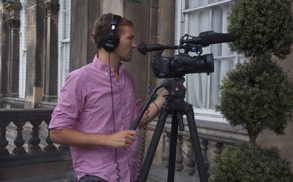 Everyone thinks they know the story about one of the most legendary bands of all time - The Beatles. However, no one quite knows their story as well as the band members' longtime friend and secretary, Freda Kelly.

Ryan White's documentary Good Ol' Freda gives audiences the chance to experience a different angle on The Beatles' story from Freda's perspective. She opens up for the first time in this funny, informative and charming story about a shy girl from Liverpool, London who landed every girls' dream job: working for The Beatles for 11 years.

In an interview with Campus Circle, White tells us about getting Freda to open up, what it was like shooting this documentary and what The Beatles have meant to him.

Campus Circle: What sparked your idea to make a documentary about Freda Kelly and her relationship with The Beatles?
Ryan White: My uncle is Billy Kinsley of The Merseybeats, a contemporary band of the Beatles that came out of 1960's Liverpool. My aunt worked for The Beatles fan club. So I grew up around their group of friends that are firmly connected to the Liverpool music scene, and one of those people was Freda Kelly. But I had no idea she was The Beatles' secretary. She really is that private about her life, and I guess it just never came up.

CC: Were you nervous about doing this documentary? If so, what were you most nervous or anxious about?
RW: Freda has resisted every offer to tell her story for the last 50 years. Because this was the first time she was going to do it and I have a lot of affection for her, I felt a deep responsibility to make something that would be faithful to her and that she would be proud of. Hopefully, we pulled that off.

CC: What surprised you the most during your interviews with Freda? Was there anything you were not expecting to hear her say?
RW: Freda is very matter-of-fact. She's telling stories about four of the most famous people in the world, but her delivery is as if they could have been any of the neighborhood boys that she grew up with. I think it humanizes each Beatle in a way that very few people can do -- these are stories about them as boys, before they became superstars.

CC: What was the biggest challenge you faced as you were making the film?
RW: Freda's level of privacy. In the movie her daughter says, "My mom is the most private person I've ever know, even with me." So it was a process to make Freda feel comfortable opening up and sharing her life with me. But once she did, I think she reached a comfort level, and audiences have been reacting very strongly to the type of person she is. Privacy and discretion are rare these days, so I think the way Freda has lived her life really appeals to people.

CC: What have The Beatles meant to you in your own life?
RW: I grew up listening to Beatles music because my aunts and uncles were musicians -- I can remember listening to Abbey Road before bed every night in the sixth grade. But I'd never had a keen interest in learning the history of The Beatles outside of their music until I started making this film. I love doing research, and I did a ton of research in the lead-up to production so I could hold my own with Freda during the interviews -- and now I'd consider myself a certifiable Beatles junkie.

CC: It was a nice surprise to see Ringo Starr say a few words about Freda in the film after the credits rolled. Was it difficult to get an interview with him?
RW: We're so grateful that Ringo participated in the film. Freda was extremely close with Ringo and his family, so I think he particularly was an important voice to be in the documentary.

CC: What was Freda's reaction when she watched Good Ol' Freda for the first time? Did she give you any feedback? If so, what did she say?
RW: The first time Freda saw the finished film was at our world premiere at SXSW this year to a packed house. I think she was incredibly nervous, and I know I was too. The audience reaction after the film was unreal though -- I think she got a 5-minute standing ovation -- so I think she finally breathed a big sigh of relief that her story was out there, and that the sky hadn't fallen down. She gave me a hug and whispered in my ear, "I loved every minute of it," so that was the most special moment for me of the entire process.

Good Ol' Freda opens on Sept. 6 at Sundance Sunset in West Hollywood and will also be available on VOD and iTunes.

Meet FREDA KELLY and director RYAN WHITE @ THE SUNDANCE SUNSET on Sept. 6th and 7th for a Q&A following the 7:30 p.m. show.