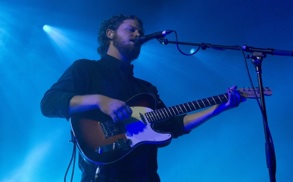 What is it about Alt-J that has America’s youth running to see the band at the drop of a hat?

Ever since the English quartet released its debut album An Awesome Wave last year, it’s caught on like wildfire in the U.S., much like it has back home. That was pretty apparent in April, when the Leeds-based outfit overflowed the Mojave Tent with thousands of bystanders the first time it ever took the stage at Coachella.

Four months later, and the buzz surrounding Alt-J hasn’t worn off one bit — not in Southern California at least.

Packing the Hollywood Palladium Tuesday night for the first of two shows in L.A. this week, the 2012 Mercury Prize winners handled another big moment in their relatively short career with grace and poise.

If one thing’s for sure, they didn’t waste any time pleasing the mostly under-30 audience, as lead singer/guitarist Joe Newman, bassist Gwil Sainsbury and keyboardist Gus Unger-Hamilton harmonized the opening lines of “Fitzpleasure” that sparked an onslaught of girlish screams and shouts.

Though it was no shock that the majority of Alt-J’s set list were cuts off An Awesome Wave, the eccentric indie rockers did offer a few surprises before turning in for the evening.

“Buffalo,” which the band produced last year for the Silver Linings Playbook soundtrack, got sandwiched in between fan favorites “Bloodflood” and “Something Good” early on. And not long after, new tune “Warm Foothills” followed the applause coming minutes earlier during “Tessellate,” the hit single that earned a nomination for Best Art Direction at this year’s MTV Video Music Awards. Even a song (“Handmade”) from Alt-J’s self-titled EP found its way into the hour-long performance.

But the biggest surprise of the night came a couple songs before the band’s encore, as it broke into a cover of College’s “A Real Hero.” While Alt-J’s take on the track, which became the signature melody for the 2011 film Drive, proved to be more symphonic than what David Grellier and Canadian duo Electric Youth originally concocted, it provided a gentle segue way into the grittier tendencies that the ensuing “Taro” presented.

In watching Alt-J work its magic on a crowd for the second time this year, it’s easy to see why Newman stands as the band’s shining star. His voice not only drives the music, but it also has a calming effect on those who bear witness.

As it closed with two more gems — “MS” and “Breezeblocks” — from An Awesome Wave, Alt-J has shown that in less than a year, it already has built a loyal fan base in today’s ultra-competitive music scene. That’s not something that’s easy to do, but if these four chaps deliver a sophomore studio effort that lives up to the hype, there’s no telling how high they will soar.