Krewella: Making You Wet and Taking Over the World 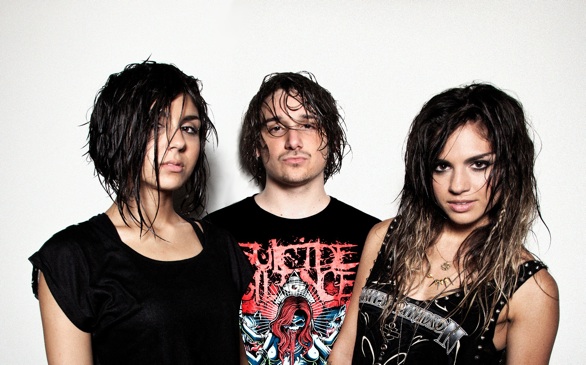 Their Get Wet album is an uninhibited mixture of dubstep, house, pop & more!
(Credit: Nikko Lamere)

Sisters Jahan and Yasmine Yousaf and producer Kris "Rain Man" Trindl collectively form Krewella. The sisters met Trindl in 2007  (while attending Glenbrook North High School), and the band has one EP under their belt, Play Hard. Their infectious beats meshed with their poppy lyrics and onstage bravado has turned them into one of the hottest acts in the electronic dance music scene.

At first glance, people think Krewella’s upcoming album title, Get Wet, has a sexual connotation, but according to Yasmine, you are free to take it literally.

“We threw around many things, we had arguments, asked labels, managers, and in the end we settled on Get Wet because it fits with the slogan we created…making you wet one track at a time,” explained the 21-year-old DJ/vocalist. “At first…people think it means something sexual, but if you come to our shows you’ll see that by the end we’ve rocked and raged so hard that we are sweating like crazy and everything inside of us has completely come out. I mean, we look like we just showered, so there’s a literal meaning behind it.”

Krewella’s onstage persona emulates hedonists at the party of the year; their performance has an in-your-face vibe that meshes well with their unabashed glee. At first sight, you’re lured into their set.

However, off stage this trio of 20-something-year-olds means business.

“We take our job very seriously. If we know we’re going to be at a club, we go over every piece of music and album and tracks we have. Now, if we’re doing a live set, Jahan and I will do serious vocal warm ups, just depends on the show,” said Yasmine.

Yasmine’s sincerity and raw energy are short of impressive. She is sweet and polite and very down to earth. That’s why it is so amazing to see someone smoothly balance being young and being in a full-time band. These three are willing to give up whatever it takes to conquer the world.

“We work on vocals four to five times a week, and our new live tour is going to keep us on an early schedule. We know if we start drinking alcohol before a tour, it will bust our singing voices, and we can’t let that happen because our voice is our instrument; we’ve got to take care of it,” explained Yasmine. “We haven’t had alcohol in, like, months, but we still know how to have a great f**king time.”

Getting people wet on large stages like Ultra Music Festival, Electric Daisy Carnival and Stereosonic is great fun for the trio, but also a super serious task. Partying and getting wasted are secondary to world domination. For them, being on stage and blasting out music are all that matters.

“We don’t need to be going crazy every night and not sleeping and doing shitty onstage,” said Yasmine with conviction. “No one wants to go to a show and watch their favorite band look all hung over and sound like shit.”

This pair of sisters just started their career together, and considering the Oasis and White Stripes, how long can we really expect these siblings to stay together? Yasmine said with certainty that they will stay together until they finish doing one thing: “taking over the world.”

“When you are having amazing experiences, you just want to share that with them, with your family. In our line of work, that’s not easy, but I have my sister so it is really amazing. Obviously yes, we fight of course, but we’re sisters. As much as I hate it when she tells me that I’m wrong, I realize she keeps me on check,” she admitted.

Be aware that no one else takes a stab at her older sister Jahan because she will make sure you regret it, regardless of whether you are part of the band or not.

“If there’s any conflict that involves her, I’m super protective of her,” said Yasmine in a sweet tone that is weighed down by her conviction. “If Kris says something out of line or ass-hole-y, I immediately snap. It’s a sister thing. I feel terrible and apologize, and luckily he gets it. Then we remind each other that we have to focus because we’re trying to take over the world, even if you don’t feel it sometimes. You have to keep telling yourself that.”

Get Wet, according to Krewella, is an ode to human existence that includes songs for every human emotion. Although they are in a good place right now, they still go thought high and low times like everyone else.

“There’s a song for when you’re angry and want to f**k the world, there’s one for when people are in love, another for people that are sad, etc. We wanted this album to capture the experience of being a raging hormone-fueled human being because no matter how old you are, everyone goes through these feelings. We wanted to be real, not like those from some f**king super pop star you can’t relate to,” said Yasmine.

DJ culture has been changing, growing and becoming more and more accepted in the mainstream. Before, people wouldn’t consider deejays real musicians, but slowly the lines are getting blurred and so are the genres. Krewella is part of this new movement.

"I used be all about the integrity of a live band and all that, but that was before I knew what it was to DJ. That was before I realized that it is also an art form. DJ Tiesto, for example, he reads the crowd and knows what they want, and gives it to them; there’s definitely an art to that,” said Yasmine.