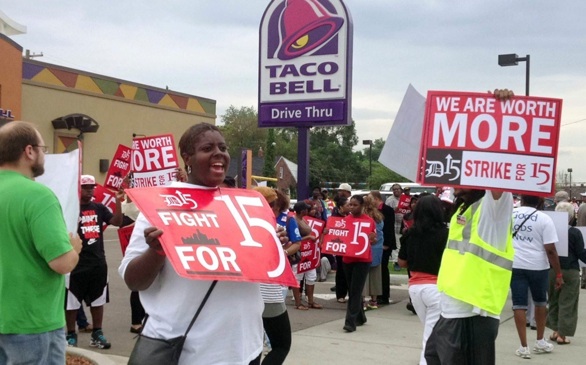 The fast-food workers protests are underway in Los Angeles, with dozens of fast-food workers marching outside of Burger King in South Los Angeles. They were spotted at 6 a.m. on Thursday, Aug. 29, holding signs that read, “Burgers and Lies,” “Yo Quiero $15,” and “Lovin' a Living Wage" and wearing "Fight For 15” T-shirts.

Burger King is not the only fast-food restaurant targeted, though. Protests are expected to target the entire fast-food industry, including McDonald's, Wendy's and Subway. And Los Angeles isn't the only city participating in the fast-food protests; picketers have started protesting in New York, Chicago and other cities.

Fast-food workers in Los Angeles make about $9 an hour, according to the protest organizers from the Service Employees International Union. They said that families living in this Los Angeles area cannot afford the basic necessities for their families with this small of an income. Thus, they have taken to the streets, demanding higher wages.