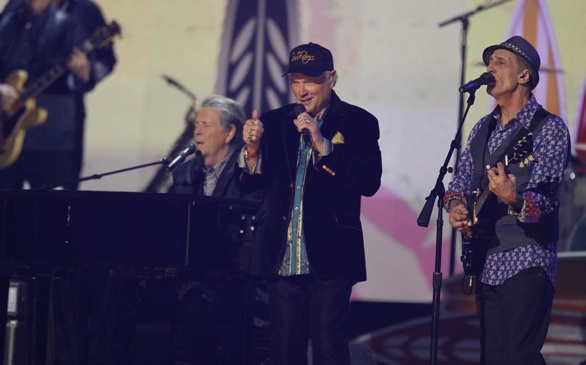 FREE MIXTAPE FROM GRAMATIK
Gramatik’s new album The Age of Reason won’t drop until sometime this fall, but he’s offering fans a free mixtape as a tide me over. “Remember when I used to make all those simple, raw, sample-based hip hop beatz?” asks Gramatik. “Well I was going through my digital basement the other day, and I found like 22 of them.” Included on Street Bangerz 4 are tunes like “Weird,” “Fly Wit Me,” “East Coast” and “Guitar Chop,” and Gramatik indicates that all the music is left over from the first Street Bangerz release. The free mixtape can be downloaded from the Gramatik page at SoundCloud. Gramatik’s The Age of Reason Tour stops at the Wiltern on Nov 8.

THE BEACH BOYS: MADE IN CALIFORNIA
There may never be another musical act that represents the fun-in-the-sun California lifestyle more so than the Beach Boys. The band is still in the throes of its 50th anniversary, and the just-released 6-CD Made in California box set is perhaps the last collectible to be issued in conjunction with that milestone. The set presents a musical chronology of the group’s career and is full of hits like “Surfin’ Safari,” “Good Vibrations” and “Kokomo.” There’s also lots of previously unreleased material including rarities “Goin’ to the Beach,” “Soul Searchin’,” “California Feelin’” and “You’re Still a Mystery.” The set also features 17 live Beach Boys tracks that have never been available before, along with unreleased cuts featuring late members Carl and Dennis Wilson. The deluxe book that comes with the set is presented “yearbook style” and holds lots of photos from the band’s personal archives.

NAS, BRITNEY SPEARS ARE NOW ESSENTIAL
Legacy Records has just added two new titles to their The Essential series: one featuring Nas and the other featuring Britney Spears. Both are career-spanning 2-CD collections holding 30 or more songs; The Essential Nas includes hits like “One Mic,” “Bridging the Gap” and “Street Dreams” along with “Hate Me Now” featuring Puff Daddy and other tunes with guests Ginuwine, Alicia Keys, Bravehearts, Quan and Olu Dara. The Essential Britney Spears is full of hits too, including “…Baby One More Time,” “Toxic,” “Till the World Ends” and “Scream and Shout” with guest will.i.am. A remix of “Boys” featuring Pharrell Williams and “Me Against the Music” with Madonna are also included in the retrospective.

SALSA GIANTS
Salsa fans have a reason to rejoice in Salsa Giants, a new CD/DVD collection from Top Stop Music. Recorded and filmed live at the North Sea Jazz Festival on the Caribbean island of Curacao, Salsa Giants features superstar Marc Anthony performing “Aguanile,” “Tu Amor Me Hace Bien” and “Valio la Pena” as well as performances from Luis Enrique, Tito Nieves, Charlie Zaa, Cheo Feliciano and many others. The international line-up also features Japanese singer Nora, who regales the crowd with her hit “Salsa Caliente del Japon.” The CD and DVD presentations are almost identical; the CD contains an extra in the show-closing “Para Celebrar” featuring all artists.

THE BEAT GOES ON FOR BANANABEAT
Cisco Adler, the man behind California lifestyle company Bananabeat, has been busy partnering-up with popular brands such as Oakley, New Era and Cellaris; however, producing hit records is his main thing. Now, Adler has teamed-up with DJ Skee to launch Bananabeat Radio where he personally DJ’s an hour-long show every Sunday. BB Radio streams at SKEE247.com, and you can expect to hear some of Adler’s own music as well as cuts from artists he’s worked with such as Mickey Avalon, Goodfeather, Kidd Russell, Mod Sun, Tayyib Ali and Shwayze.